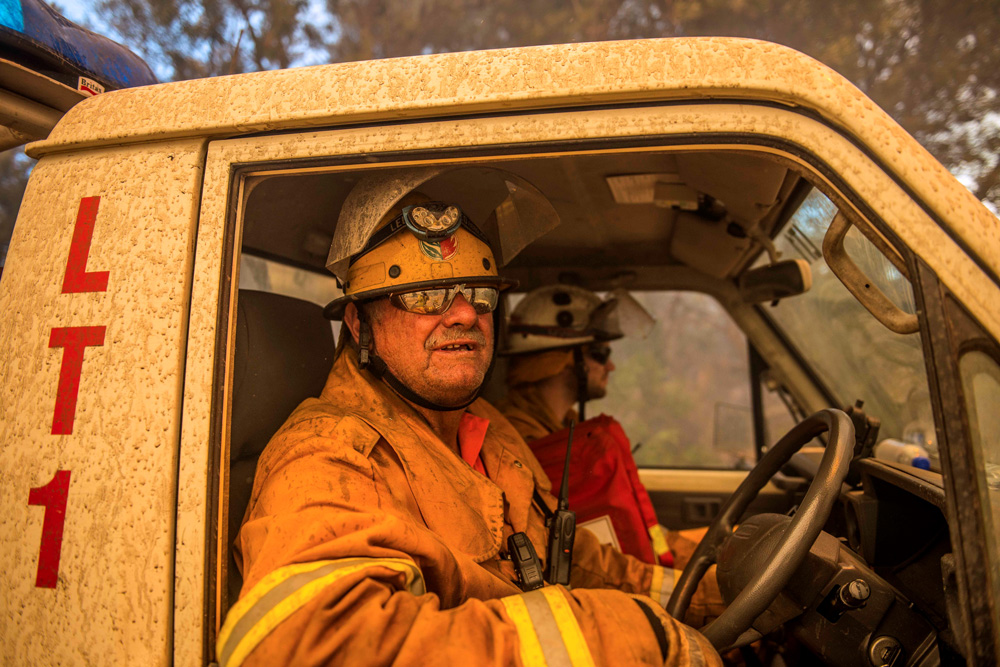 It is with a heavy heart that we mourn the loss of William (Bill) Tully.

We are honoured to be able to share the eulogy that Mandogalup Volunteer Bush Fire Brigade Captain Steve Treeby read on behalf of his fellow Bushfire Volunteers at Bill’s funeral today.

He quickly became a very valued and dedicated member of the Mandogalup brigade and fought many fires within and outside of the Kwinana fire district.

It is through his great ability to adapt and assimilate into any environment and situation that Billy T become well known in the fire fighting community of Western Australia.

Bill became a Lieutenant of the Brigade and held the position for 10 years before, in his words, “I’m standing aside to let younger members have ago” like the true mentor and gentleman he was.

When required, Bill could be serious, always putting safety first. He had great knowledge of fire behaviour, vehicle capabilities and his own crews capability.  A very good and capable firefighter who held the respect of all those who knew and worked with him. We know that Bill derived a great deal of satisfaction from passing on his knowledge, experience and wisdom to our firefighters, particularly the new members.

These volunteers, to this day, are truly grateful and will always have the utmost respect for him and the knowledge he shared, enabling them to grow into the professional firefighters they are today.

You always knew when Bill was on the fireground.

No one was safe from his “learning while having fun” attitude.  Whether it was a blast of water from the hose “just to wake you up” or a dead snake he had carefully placed in the cab of the fire truck, he was always up for a laugh.

On one occasion on the fireground, Bill was laying on the ground under a tree taking a quick nap. When spotted, panic set in among some of his fellow firefighters who literally jumped on him to ensure he was only sleeping.

Bill was not always politically correct among friends and his change room antics at the station were a great source of humour. Always in his shorts, yellow or red socks and pink croc’s to go with his hearty laugh, Bill always kept our spirits high.

He had a great rapport with young people – almost like the pied piper, knowing how to engage with and lead them. And of course, his great spirit never missed an opportunity to wind them up with his “Dorothy Dix” advice about their love life, which often drew a few red faces and created much laughter for all.

Occasionally the Brigade managed to get one back at him like the time he got his face on the front page of the West Australian whilst attending the large Jandakot fire a few years ago.  From the point on, he became our media person – much to his dismay.

In 2018 Bill was awarded life membership of the Mandogalup Volunteer Bush Fire Brigade for his service to community, long service, dedication and commitment to the Brigade.  He was also awarded the National Service Medal from the Federal Government for diligent national service to the Brigade. Bill often spoke about how honoured he was to have received these awards.

Friendship and respect was a big part of Bill’s life and we will miss him dearly.

He was a great mate, teacher and mentor to all in our Brigade and he will always be remembered.

Clearly, Bill was a committed, respected, valued and honourable man who dedicated his life to mentoring others, supporting community and being a great all round, down to earth aussie bloke who was proudly committed to Volunteer Bushfire Brigades of Western Australia.

Thank you for your shared passions Bill. Bushfire Volunteers extend our sympathies to your wife and family during this challenging time.

God Bless you, now its time for you to take that well-earned rest.

Bill passed away after his battle with cancer.