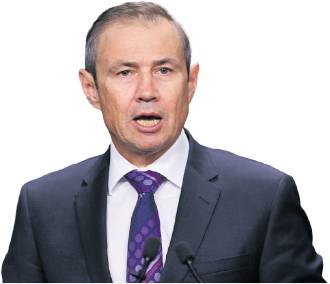 Volunteer firefighters are the latest group to be included under WA’s sweeping jab mandates.

Health Minister Roger Cook confirmed the move on Monday morning, meaning the mandate has now been extended to include to 2500 volunteer Fire and Rescue Service members and 19,000 Bush Fire Brigade volunteers.

Previously exempted from the directives, which only applied to career firefighters, they will now have to have had one vaccine by December 31 and be fully protected by January 31.

But the mandatory vaccinations for volunteers may be “reckless”, the peak body for the State’s unpaid firefighting brigades has warned.

Mr Cook, pictured right, conceded there were “concerns” about mandating jabs but said that the decision was important for public health.

“Obviously volunteers interact with professional firefighters and rescue workers, so it’s important that they too are covered under these protocols,” he said.

“There’s obviously challenges in relation to volunteers. They have a different relationship to to the workplace. (But) they too, will be called into a situation where they can’t guarantee the safety from a public health perspective.”

“The association supports vaccination, we don’t want to be painted as anti-vaxers. But there will always be some people who won’t be vaccinated,” Mr Brown said. “Any sort of mandate will be a barrier to people donating their time and skills to save their community. These are volunteers, not paid employees.

“Treating our members like workers in a paramilitary organisation will put them off, and some may choose to quit.”

Mr Brown said the association had received messages from members threatening to leave. “We’ve begged people to tolerate the rule, because we rely on their invaluable work,” he said. “But we could lose some. We’re going into fire season. . . we are concerned.”

From teachers to construction workers to newsagents, the WA Government has ordered 75 per cent of the State’s workforce to get vaccinated or face a possible fine of up to $20,000.