The West: PM offers $2b to help douse pain

The West: PM offers $2b to help douse pain

Below is an excellent editorial from our friends at The West Australian newspaper.

Scott Morrison will pump at least $2 billion dollars into a fund for communities ravaged by this season’s bushfires, declaring his promised Budget surplus is of “no focus” and he will meet “whatever cost” is needed.

The money will be given to local governments, farmers and primary producers hit by the fires and deliver mental health supports to first responders.

Centrelink debt recovery will also be suspended for at least two months in fire-affected regions.

The Prime Minister made the announcement at a press conference in Canberra yesterday alongside Treasurer Josh Frydenberg and Deputy Prime Minister Michael McCormack, where he said rebuilding communities was more important than his promised $5 billion Budget surplus.

“The surplus is of no focus for me, what matters to me is the human cost and meeting whatever cost we need to meet,” the Prime Minister said.

Mr Morrison, below, said he would work closely with the States, and the $2 billion will be spent over the next two years by the new national bushfire recovery agency, which is being run by former Australian Federal Police commissioner Andrew Colvin.

Getting money to farmers who have lost stock will be a priority. State governments are not being asked to match the payments and a bushfire levy has been ruled out.

The money is on top of the existing disaster recovery payments and allowances. WA communities hit by bushfires will be eligible for the funds.

The Prime Minister said the fund had been modelled on the North Queensland flood crisis response and was aimed at getting money as quickly as possible to farmers and businesses hit. 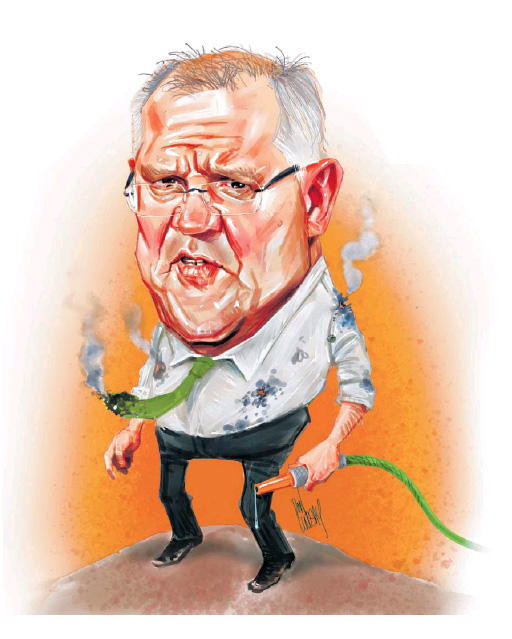 “What we saw particularly when we were responding to the North Queensland flood crisis was the support that needed to go in quickly for small businesses — and particularly the primary producers — in those areas,” Mr Morrison said.

“We will be doing that in concert with those locally who are on the ground, those in local administrations, those who have so much of the information that we need to best direct and target these payments.”

Mr Frydenberg said it was too soon to know exactly what the cost of the fires was going to be.

“We have been consistently saying, a surplus is never an end in itself,” he said. “It is all about getting money to the people who need it most and that is what we’re doing today, as we were doing in light of the drought,” he said.

“The mid-year economic and fiscal outlook that was released at the end of last year did acknowledge and refer to the fires as well as the drought. It is too early to tell what the full economic impact will be but the key message today is there is $2 billion now put to work to help those communities to rebuild.”

Since the 1939 royal commission into the Victorian Black Friday fires which killed 71 people there have been at least 57 major inquiries across the country into bushfires.

This includes the Victorian royal commission into the Black Saturday Fires in 2009 and the WA State government inquiry into the 2016 Yarloop blaze which killed two people and destroyed more than 160 homes.

The terms of reference are remarkably similar to an inquiry Mr Littleproud called in 2018 on the impact of land-clearing laws on rural communities after more than 100 fires hit Queensland.

On average there has been a major inquiry into bushfires about once every one-and-a-half years since 1939.

In too many circumstances the recommendations from these inquiries have been ignored or have not been implemented properly.

Most recently a WA coronial inquest into the deaths of four people in the 2015 Esperance bushfires called for a new fire station to be created to service the region.

He is still considering the 11 other recommendations from the report which was handed down in December last year.

There are now calls for a royal commission into the bushfires which have killed 26 people across the country and the national response to the disaster.

Prime Minister Scott Morrison has said he is open to the idea, but with the fires still burning and communities in mourning it is likely if he does call a royal commission he will wait some time before doing so.

Opposition Leader Anthony Albanese yesterday said a royal commission would be “worthy of consideration”, but also said the focus needed to be on the immediate response.

Among unions representing firefighters there is widespread support for a royal commission and unions across the country are planning on making an official call for one later this week.

Both Mr Morrison and Mr Albanese are right in saying the immediate focus needs to be on the ongoing disaster.

However given the scale of death and destruction there is no doubt some form of national inquiry into the effectiveness of the response will need to be held.

The key for whatever form the inquiry takes should be that its recommendations are actually followed.

However they also have extended powers to compel evidence.

The publicity they generate also makes it much harder for recommendations to be ignored or swept under the rug.

Many firefighters involved in the union movement believe if a royal commission is held it will be enough to force Federal and State governments to start dedicating the necessary resources to mitigation and bushfire response.

United Firefighters Union WA State secretary Lea Anderson said in WA resourcing had been too low for 10 years, forcing senior Fire and Rescue officers to make impossible decisions about what they prioritise. Ms Anderson said she was particularly disappointed by the State Government’s decision to reject the call from the coronial inquiry into the Esperance fires for a new professional fire station given the area’s isolation and reliance on firefighters being flown in from Perth.

Mr Logan said the Government had put record funding into managing bushfires including $50 million for mitigation.

“The union is only looking at the career service which is a false argument for places like Esperance, which actually need more mitigation and that is exactly what this Government is doing,” he said.

Ms Anderson said the union understood the need for a royal commission into the latest fires. “The terms of reference need to be fairly broad, it would be a complete waste of time were it too narrow and we just saw the same arguments being recycled,” she said. Land management was important, Ms Anderson said, but was not the only issue that needed to be addressed. “We need to have a comprehensive review of the resourcing for firefighting across the country including the need for more effective resourcing for aircraft,” she said.

University of Melbourne fire ecology expert Dr Kevin Tolhurst is working on research which has counted the 57 inquiries since 1939. He said he did not see the need for a royal commission and that authorities had already been given answers on what needed to be done on “good land management” from previous inquiries. “The trouble is they consume so much time and effort, we already know what the answers are,” he said.

While there will be others who feel this way, this season’s bushfires are the worst many communities have seen. Lessons must be learnt. When the dust has settled a proper review, be it a royal commission or not, must be held.

When the dust has settled a proper review, be it a royal commission or not, must be held.