The independent inquiry made 76 recommendations in the wake of Australia’s Black Summer, and NSW Premier Gladys Berejiklian said her Government would adopt all of them.

Compulsory land clearing, night-time water bombing, and aggressive hazard-reduction burning were among the recommendations, as were strategies to protect fauna.

Land owners in some areas will be legally required to ensure their properties are safe by clearing land and conducting hazard-reduction burns.

“If people ignore the risks on their property and that endangers the lives and livelihoods and the infrastructure of a neighbouring property then the RFS are deemed, quite rightly in my mind, to rectify and to reduce any hazards,” he told Nine radio.

Ms Berejiklian called last season’s deadly bushfires “the biggest challenge we have faced in more than a century”.

“We know the scars of the season will go on for a long time,” she said.

“We’re not going to pretend that we have managed firstly deal with all the physical issues and secondly, of course, the ongoing trauma of those directly impacted.

It was recommended evacuation orders be given earlier during a fire to people living in areas where there is only one road in and out of the vicinity that is surrounded by bushland.

The report also suggested that the use of waterways for evacuation be explored. 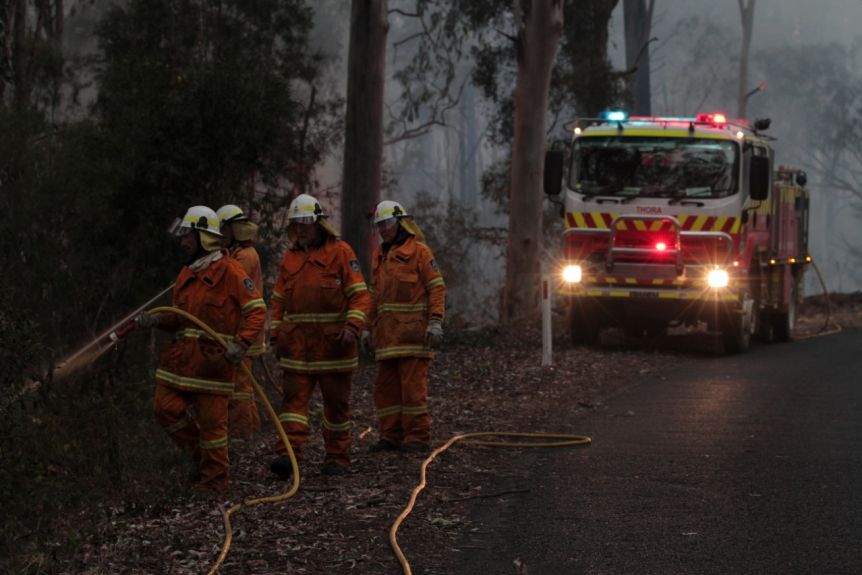 The NSW RFS will have enhanced powers to prepare for and fight bushfires.(ABC News: Jerry Rickard)

Also included was guidance on which aerial fire-fighting assets should be used in the future, and what strategies personnel should pursue.

These included increased water-bombing at night and employing more rapid aerial responses when fires are burning in risky and hard-to-reach terrain.

The inquiry’s report also advised on measures to protect the mental health of firefighters.

Better protection for native fauna, including koalas, and training for people who care for injured animals, was also part of the recommendations.

The report noted greenhouse gas-linked climate change had “clearly played a role” in the conditions which led to the fires and supported their spread.

Mr Elliott acknowledged the fires were largely the result of lightning strikes in the dry vegetation.

He said while the governments cannot stop lightning, they can prepare communities and agencies for bushfire risks.

“These 76 recommendations are wide-ranging, but they also show that there is no silver bullet,” he said.

“If it was not the two gentlemen here, the agencies, and workers across the state from all our agencies, we would have looked at a far bigger picture,” she said.

Last summer’s bushfires resulted in the deaths of 26 people in NSW, including six firefighters.

Across the state, more than 5.52 million hectares of land was damaged by the fires.