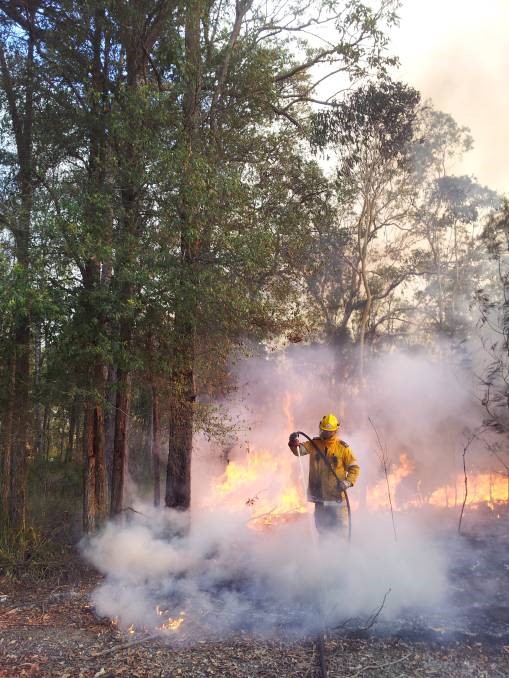 Hosed down: Queensland’s Fire and Emergency Services has hosed down rural firefighters’ concerns, saying it is working to ensure all three services continue to grow and work together. Picture: RFBAQ

A special meeting of Queensland’s Rural Fire Brigades Association has called for a restructure of fire services in the state and an end to the wilderness that rural volunteer firefighters have found themselves in.

In a stark vote of no confidence, none of the 18 regional representatives attending Saturday’s meeting either in person or via video link voted to support the Queensland Fire and Emergency Services in its current structure.

Sponsor's message
A subsequent letter from the RFBAQ president Ian Pike to Premier Annastacia Palaszczuk outlined the meeting’s overwhelming support for the creation of a Department of Fire Services as a more efficient model of supporting and empowering rural fire brigades and their members.

In putting it forward, members want to return decision making power to those with local knowledge and community defence skills.

Mr Pike’s letter emphasises that the state election is less than 100 days away.

At the heart of the discontent is a restructure in April 2019, which Mr Pike said saw QFES balloon into a department that increased the number of employees at the expense of frontline service provision. 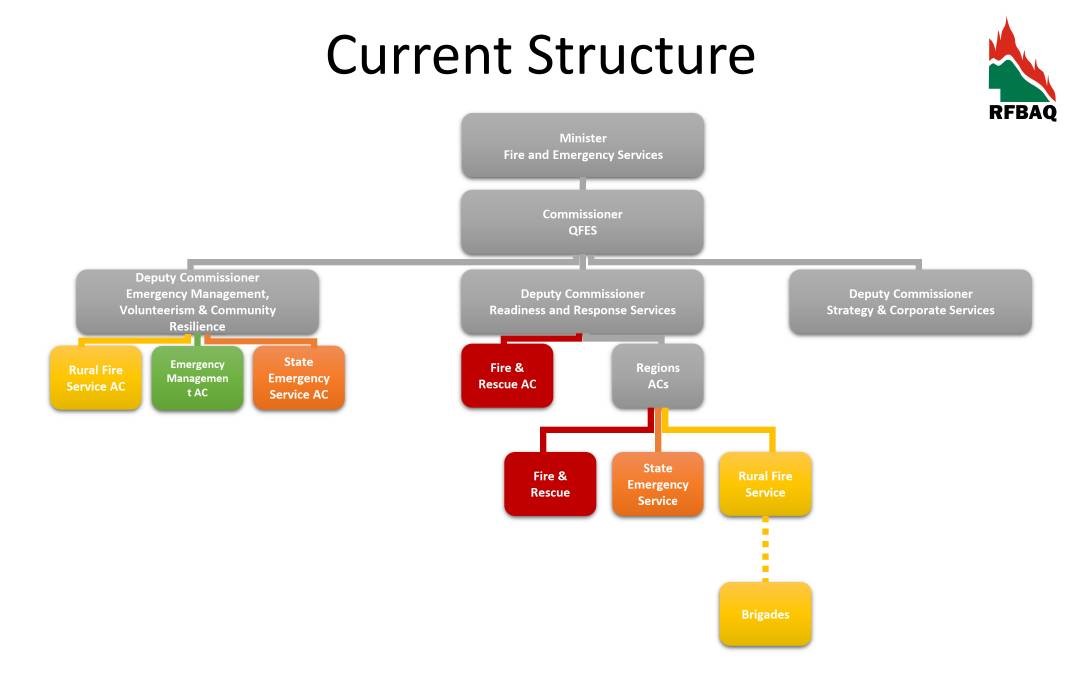 The current structure of QFES.

In the current structure the Rural Fire Service reports to a QFES assistant commissioner, all of whom have a metropolitan Fire and Rescue Service background.

“This QFES-driven structure has led to multiple failings in support for the 1440 rural fire brigades that defend 93 per cent of Queensland,” Mr Pike’s letter said.

Among the failings listed were the enforcement of Blue Card registrations, disempowering brigades to put ‘fire on the ground’ during fire season, Rural Fire Brigade paid staff not industrially allowed to progress beyond the rank of superintendent in the regions, and a reduction in the number of Rural Fire trucks built.

“The lack of funding for frontline services is not replicated within the QFES, as there has been an increase in media and Frontline Enabler (Support) staff of 98 FTE over the last three years,” the letter said. 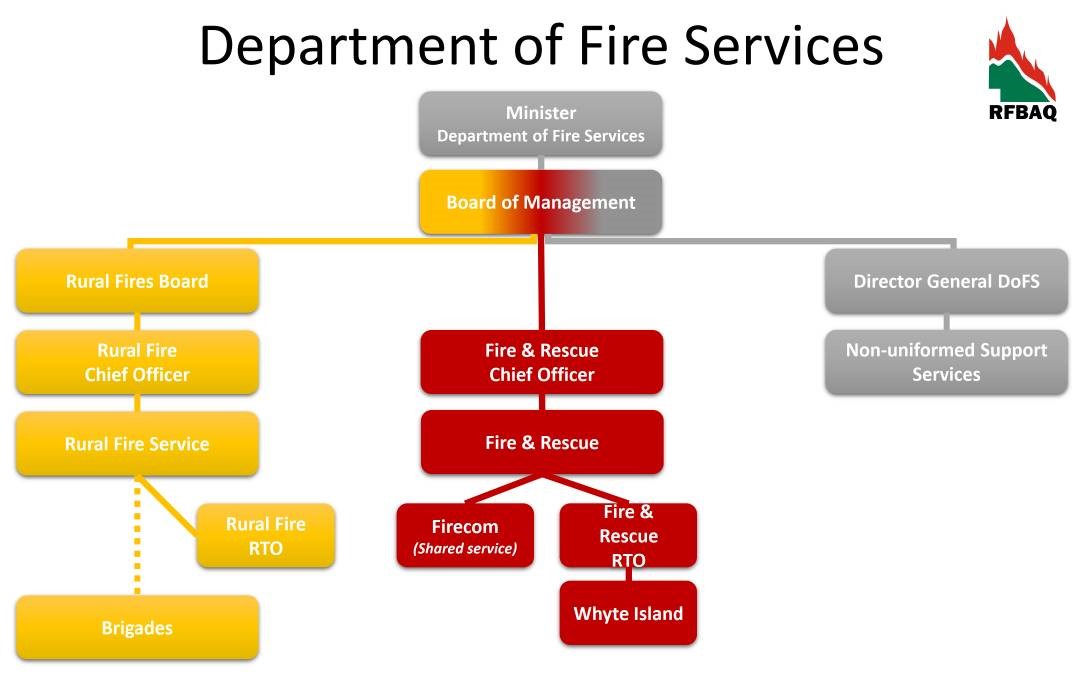 The chain of command proposed by the Rural Fire Brigades Association of Queensland in its Department of Fire Services model.

The letter was addressed to the Premier and duplicated to other politicians including LNP leader Deb Frecklington, KAP leader Robbie Katter, and NQ First party leader Jason Costigan.

Ms Palaszczuk didn’t respond personally but a QFES statement said it would continue to provide support to the SES, Rural Fire Service and Fire and Rescue Service, “ensuring all three services continue grow and work together to achieve the best result for Queensland”.

It said the three services within QFES worked together to protect Queenslanders and support each other during times of disaster.

” This close and unique relationship between highly trained professional firefighters and dedicated volunteers with local knowledge was seen during all phases of the 2019-20 bushfire season and 2019 north and far north Queensland monsoon.

“During these events all three services worked together to support Queensland communities and QFES provided coordination, strategic oversight and guidance.”

The RFBAQ call for a restructure was fully supported by the LNP and KAP, with Robbie Katter saying he wanted to see rural firefighters retain their autonomy.

He described rural firefighters as being “belted around”, citing the compulsory Blue Card issue that has seen a quarter of Queensland’s brigade members hand in their membership.

“What was asked of them was in no way commensurate with bushfire management risk,” Mr Katter said.

“It was an absolute nonsense – well-intentioned policy but the collateral damage was too big.

“It’s the perfect example of Brisbane policy for a rural area.”

Opposition Fire and Emergency Services spokesman Lachlan Millar said it was no surprise that rural firies wanted a better deal than what they were currently getting under the Palaszczuk government.

“Whether it’s the $13 million funding cuts or the botched roll-out of the Blue Cards, our volunteer firies have had a gutful.” 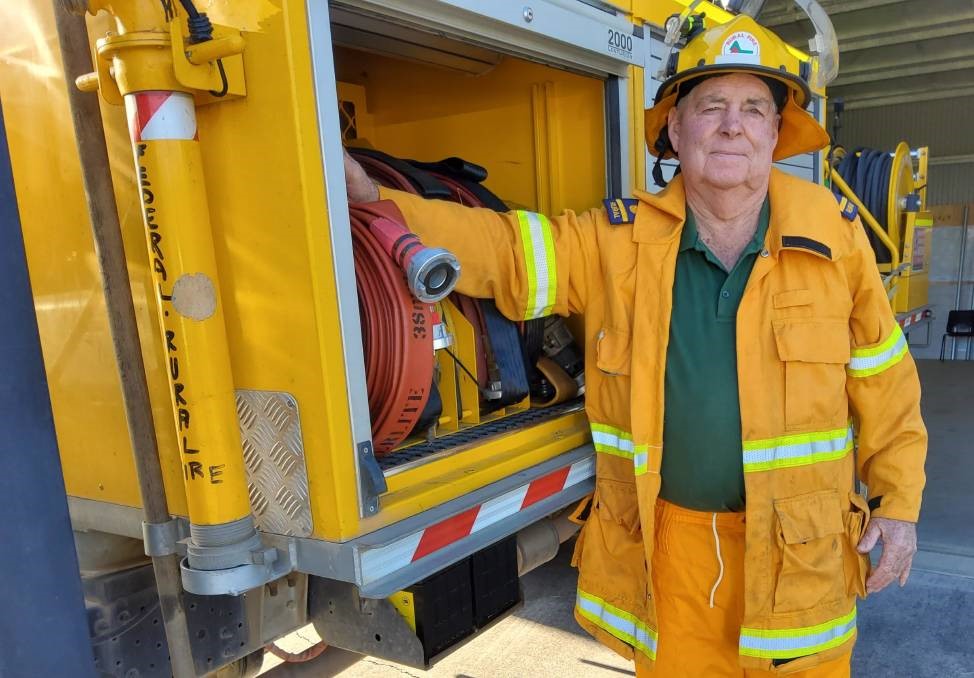 Rural Fire Brigades Association of Queensland president Ian Pike says the degree of unhappiness in his 1440 rural brigades with the way they’ve been shunted aside is huge. Picture – RFBAQ.

The RFBAQ also listed five strategies it is working to achieve, for the extension of PTSD support and compensation to all firefighters equally, for emergency officers to come under Fire legislation, for a Volunteer Respect Act, for the full implementation of the Malone Review into the Rural Fire Service Queensland, and for a Conditions of Service MOU for Rural Fire Brigade volunteers.

The intent of these centres around recognising and empowering volunteerism.

“The current QFES Act 1990 is a result of small sections of the comprehensive Rural Fires Act 1946 being crammed into a metropolitan fire-centric Act that had no sympathy for or understanding of land management,” the RFBAQ letter said.

“The resultant Act has not been fit for task since its inception 29 years ago. The QFES Act 1990 does not contain the word ‘volunteer’ once in its 216 pages.

“With Rural Fire Brigades willingly volunteering to undertake a greater degree of community defence activities, the many shortcomings of this legislative hodgepodge are now impeding the 1440 Rural Fire Brigades from providing true place-based decision making.

“This current Act is disempowering locals from their ability to defend their communities and the state as a whole.

“The most fundamental change that the RFBAQ recommends is that the current terms ‘Fire Officer’, ‘Fire Service Officer’ and ‘Authorised Officer’ be replaced with the new inclusive term ‘Emergency Officer’.

“The RFBAQ would then see that an Emergency Officer can be full time, part time or volunteer.

“The legislative concept of the one term that encompasses full time staff, part time staff and volunteers has been successfully demonstrated in the Tasmanian Fire Service Act 1979.

“Tasmania is one of the only states that has one piece of legislation that incorporates full time, part time and volunteer firefighters.

“By the adoption of the new inclusive term ‘Emergency Officer’, the Fire Act will not only be empowering current paid staff and volunteers but also demonstrate how the department can support the three separate and distinct services with the flexibility of incorporating potential future volunteer organisations.”