There is never a “good” time for a dry thunder storm and sunset on Boxing day, when many were still recovering from the over indulgences of the previous day, was no different.  The lightning strike in the Stirling Range National Park resulted in a bushfire which would eventually consume 40,000 hectares of the national park.

The fire quickly intensified and despite the considerable efforts of local Bush Fire and DBCA’s Parks and Wildlife brigades, escalated to a level 2 incident early on the 28th December and late on the same day was declared a level 3 incident.

We all know about the outstanding work carried out every day by our Bush Fire Brigade’s throughout the state however many of us on the fire ground are so busy putting the “wet stuff on the hot stuff” we often don’t appreciate or in many cases understand what happens off the fire ground.   During the Stirling Range fire I joined the Incident Management Team and observed from a volunteer’s perspective the work which occurs.

By 0600 on Sunday the 29th the level 3 preformed team from Perth had been mobilised and transport to Albany organised.  DBCA’s Parks and Wildlife South Coast Regional office was already established as the incident control centre.  By late afternoon a full multi agency incident management structure had been established – this was achieved on the Sunday mid Christmas/New Year holiday break (fires never occur at convenient times!) 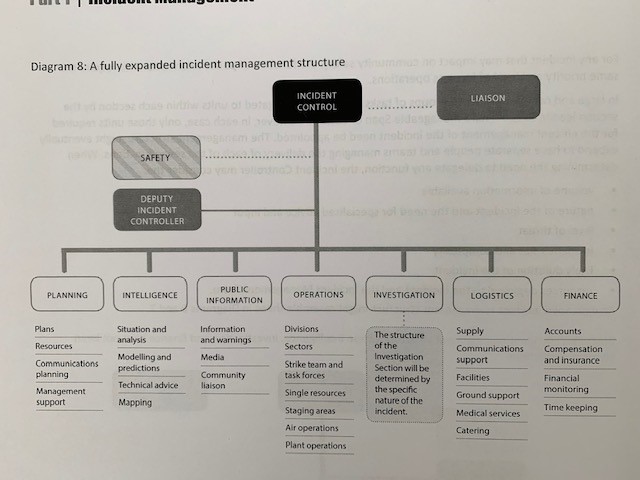 Something not widely understood is the legislative requirement for all level 3 incidents to be controlled by the relevant Hazard Management Authority (HMA) – in the case of a bushfire this is the FES Commissioner.  As a result level three (and in some cases complex level 2) incidents are always controlled by DFES.

The fire was being well managed by the team at Parks and Wildlife and the escalation to level 3 with the subsequent transfer of control responsibility to DFES saw a number of the key IMT roles including the IC and operations officer’s roles retained by Parks personnel with the DFES team assuming the deputy roles.   The integration of the two agencies was seamless and over the next 3 days I observed the strong work ethic and group problem solving approach of all those involved.  Views were sought and opinions respected irrespective of the DFES, Parks or Volunteer badge on your shirt.

As the fire evolved so did the support; a safety advisor was appointed, strike teams arrived from Perth metro and the South West brigades, a specialist air operations team were on hand to coordinate the fleet of fixed wing water bombers, and helicopters, field caterers and comms support were established, just to mention a few.  While the Operations section was kept busy running the fire the Logistics officer was fully occupied finding accommodation for some 350 personnel and meals for over 500 – all on a Sunday afternoon in peak holiday season.  Procuring earthmoving equipment, diesel and water tankers, portable generators and not to forget toilets were all taken the logistics teams stride.  The public information team were kept busy with the ever changing bushfire warnings in addition to providing local government, media and public information updates. The Planning and Intelligence teams worked closely together to develop incident objectives, identify new and emerging risks and provide detailed, accurate information to the Incident Controller and Operations about the fires current and predicted path.

The SES volunteers were unbelievable and like our bush fire volunteers worked tirelessly throughout the day and night supporting operational personnel at the control point, providing transport for crews, collecting and delivering anything and everything needed.

On the fire ground we are very familiar with the direct (sometimes very direct) support provided by the water bombers but less familiar with how they interface with the State Air Desk and the Air Operations Team.  Level 3 incidents have an Air Operations team embedded locally in the IMT and the interaction between the water bomber pilots, air attack supervisor and Air Intelligence is crucial to not only bringing a fire under control but critically to keep all those on the fire ground safe.   The air intel helicopter operates above the water bombers and air attack supervisor and is equipped with a high definition camera, thermal imaging equipment and geospatial computers which relay real-time video footage directly to the Operations centre. This footage significantly enhances operational decision making and is retained for post incident analysis and training purposes.   During the fire the IMT maintained an overview of other fires in the region and as a result Air Ops was able to divert water bombers to assist in controlling several new fires which started in the Albany region during the incident.

Various agencies including Police, St John’s, Telstra, Western Power and local government were all on hand as required with WAPOL and St John’s participating in the IMT meetings and maintaining representatives at the Incident Control Centre for the duration of the incident.

Large incidents are very costly to run with significant expenditure incurred over the duration of the incident.  Where practical and possible local suppliers are utilised, many of whom are small businesses and all need to be paid.  One of the less obvious and some might say thankless behind the scenes functions is that of finance.  The finance team carries out the complex task of collecting the invoices, keeping track of expenditure and, importantly, paying the bills.

In the preceding paragraphs I’ve tried to provide a small insight into what we don’t see from the fire ground. What I did see is a highly engaged team of women and men, whether they be volunteer or paid, whether in the IMT with direct responsibility for managing the fire or involved in catering, accommodation, resource management, transport and delivery or cleaning working tirelessly, 24 hours a day, in exactly the same way as our volunteer BFB’s and farmers work with our DFES and Parks & Wildlife colleague’s to get the job done.

Once the fire is out and the brigades have returned home the team turns its attention to Recovery however that is a story for another day.

Finally a very big thank you to everyone at every level involved for an outstanding effort in bringing this complex fire under control.