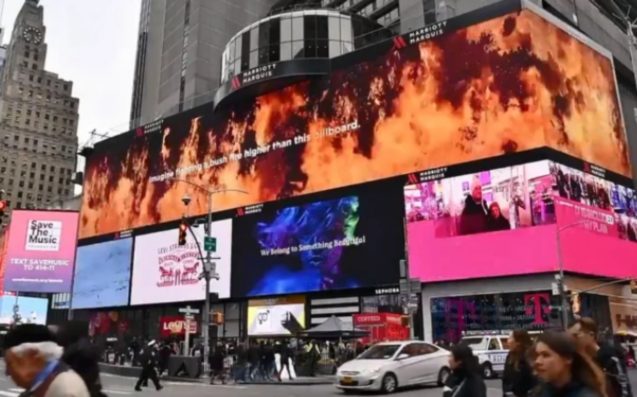 A huge 20-metre high billboard has appeared in Times Square in New York City, thanking firefighters for their heroic efforts over this horror bushfire season.

The billboard flips between two screens. One is a thank you message, while the other puts into context just what firefighters have been up against – literally.

“Thank you to the brave Australian and US firefighters defending Australia. And to the world for all your support,” the first screen reads.

The second screen shows a wall of flames bearing down on passers-by. “Imagine fighting a bushfire higher than this billboard,” it reads.

“We wanted to say a big ‘thank you’ to all the firefighters who have worked so hard over the last few months, and to the community for its support,” the RFS tweeted.

If you were concerned this billboard was being paid for by your donations, don’t be – the space was donated by US company Silvercast, and brought to life by the Sydney arm of advertising agency Wunderman Thompson.

“Being that it’s the biggest electronic billboard in North America, with 300,000 people walking by it each day, we felt we needed to utilise it as best we could,” RFS spokesman Greg Allan said, reports the SMH.

“It was an opportunity to thank the firefighters both here and from overseas, and also the community not just here in NSW but also around the world, who’ve shown their support.”

Sadly, there were 34 people killed this bushfire season, several of whom were volunteer firefighters caught in unimaginable conditions.

While the worst is certainly behind us – the NSW RFS announced just last week that all bush and grass fires were contained for the first time in months – Australia’s bushfire season is not yet over.

As of Wednesday afternoon, there were four fires listed as “out of control” in NSW, with six others in the process of being controlled.