Mumbrella: ‘Nothing can prepare you for it’

Mumbrella: ‘Nothing can prepare you for it’

‘Nothing can prepare you for it’: Sydney Morning Herald photographers on covering the Australian bushfire crisis from the front-line

Nick Moir and Wolter Peeters are two Walkley-winning photographers who have been covering Australia’s raging bushfire crisis from the front lines, working in dangerous conditions alongside firefighters and communities. They spoke with Mumbrella about the training they receive before entering a bushfire zone and the emotional toll of the season, and uncovered the behind the scenes of their amazing work for the Good Weekend.

“It’s one of the few occasions in Australia where you come across something similar to a combat situation. This fire season has been like a war every day and people have been killed. The lead up each day is quite frightening,” says Sydney Morning Herald photographer Nick Moir.

He and his colleague Wolter Peeters have spent months on the front line of Australia’s bushfire crisis and it’s clear that what they have witnessed is truly indescribable. So, they let their photographs tell the story. 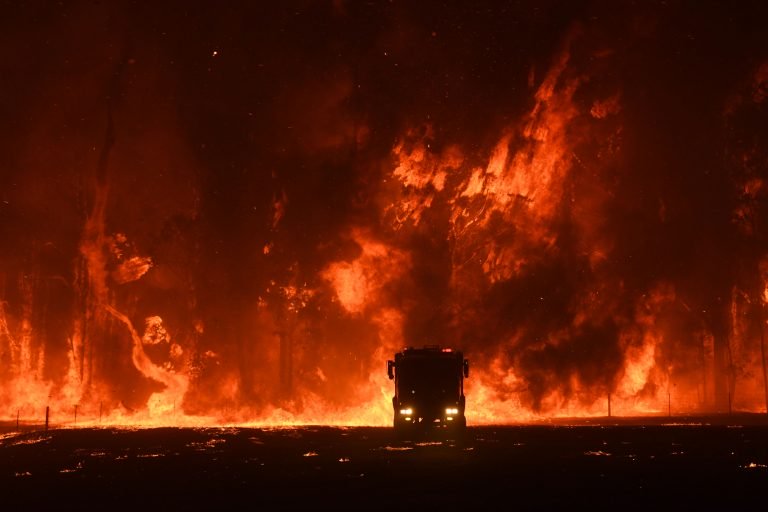 The duo have worked with the SMH for many years, from back in the Fairfax days to now, under its new owner Nine. Having both grown up regionally, they’re no strangers to the drama Australian weather can provide, which is why, they say, they’re both drawn to it.

“When nature wants to, it will put its finger down. It will cut off the power, it will make you scared and it will put you in your place. It’s also astounding to watch,” says Moir.

Moir has been the chief photographer for the SMH since 1993 and specialises in covering severe weather conditions. Peeters began his work with Fairfax in 1999, moving to the Herald in 2010.

That stretch of experience – from life lived in regional Australia to years covering the worst the Australian environment can throw at them – is completely necessary for facing the current, unprecedented, conditions. Before heading out into the fires, photographers undergo media training, but that doesn’t automatically equip them to handle a raging fire-front.

“Some of those days were killer days,” says Moir, adding that both he and Peeters have seen inexperienced photographers head into the conditions and, while they survive, there is always the chance they won’t.

“Nothing can prepare you for it. You don’t put yourself in front of the massive fires without the experience,” adds Peeters. 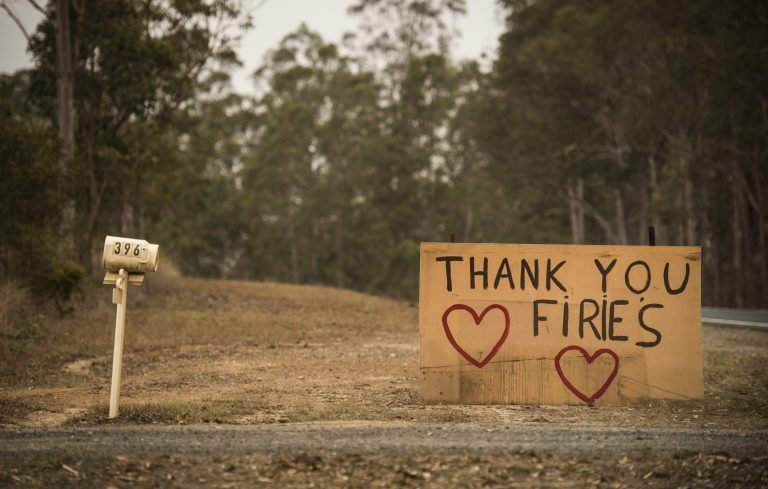 The heat, he says, is indescribable. There is no comparison to facing a raging bushfire and even the most experienced photographers need to respect the fire above all else.

Moir spent time shooting the Currowan fire, which burned between Batemans Bay and Nowra. He wanted to head to the top of a nearby pass, the perfect vantage point for photographing the inferno. But he didn’t. Something told him: not today, not this fire. It was the right choice.

“The fire moved so fast, it ate the forest,” he says. Peeters was there shortly after, photographing the blaze’s wreckage.

“We photographed a Land Cruiser parked askew on the road and when we got close we realised the front axel had been ripped out. They’d been trying to flee the fire and hit a fallen tree,” he explains.

“They had the luck that where it happened they were right next to a dam so they snipped through the fence and spent the next three hours sheltering in a dam. Very lucky to be alive.”

It doesn’t escape Moir how easily that could have been him.

“When I had heard about that accident, that’s where I’d planned to go, but I just thought I might be underestimating the fire activity,” he says.

“And it comes with experience where you’ve experienced enough to know that you don’t know enough and each time the fire activity this season has taken everybody by surprise. It always went harder than expected and further. Nobody’s heard of this activity, it’s just off the charts.” 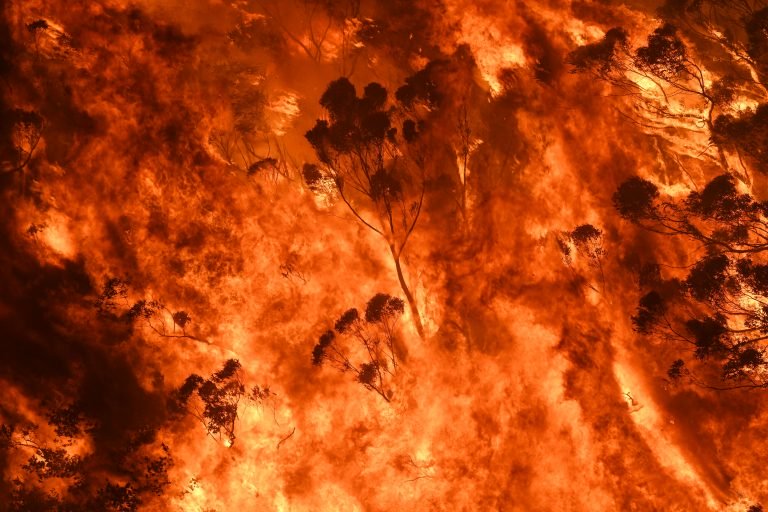 Covering these events takes its toll, especially with a fire season as long and arduous as the one we’re currently in the middle of. Before Christmas, Moir says he was beginning to feel like it was all too much; the anxiety, the planning and the preparation had pushed him to his edge.

What’s important, says Peeters, is being able to debrief at the end of a hard day, adding that his wife and photographer mates are a great support during the tough times. The worst parts, adds Moir, are seeing areas you grew up burn. “It’s like a bad dream,” he says.

“Each time it was just stepping up another level and another level and it just meant that I was really starting to be concerned that the next time I put myself somewhere it would be a place I couldn’t get out from.” 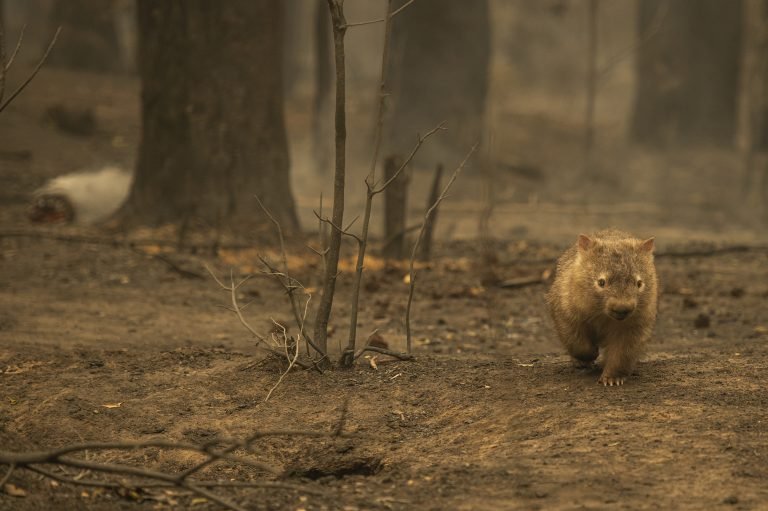 On January 25, the Good Weekend paid tribute to the ‘summer that changed us’ with a special fire wrap across its front pages. The image, a striking shot of a firefighter running from falling embers, was captured by Moir. The shot is the result of a career running court jobs, he laughs, and being able to move fast and subconsciously.

He was working the Green Wattle Creek fire in Orangeville when he took the photo. The blaze had appeared to quieten down, but a day of burning had built up gas in the atmosphere, which now had nowhere to escape to. Around 9pm, the wind changed, and, suddenly, the ‘fire exploded’ Moir recalls.

“I was with some fire and rescue guys, everyone just ran. The flames were 100m high. As we’re running I was taking photographs. I shoot manually, so you’re having to manually change all your exposures.”

Suddenly, he and his camera were thrown from darkness into blinding light. Instinctively knowing how to get the best shot, Moir changed his settings and snapped away while he fled. Over the next 10 minutes, while the people on the ground spent time trying to locate everyone, Moir was frantically trying to file the pictures from his car.

“But we survived,” he says. 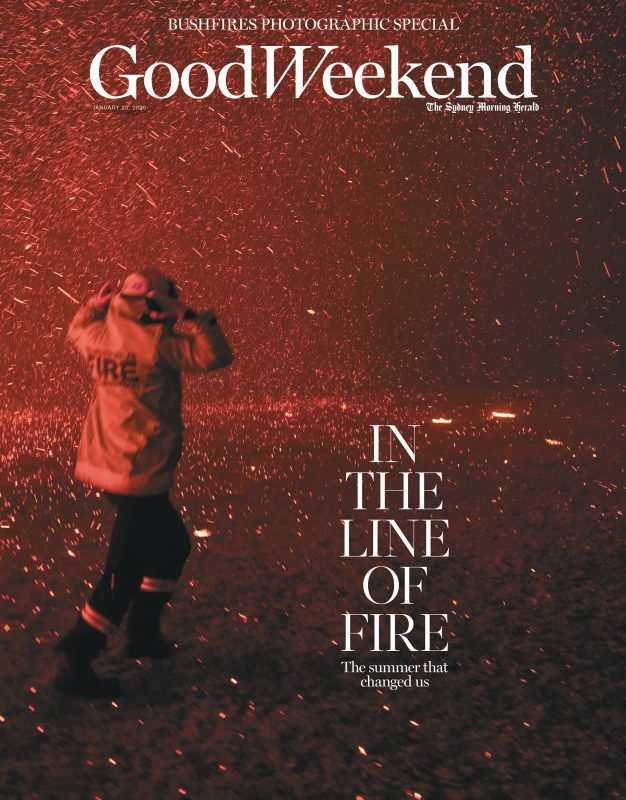 The resulting 16-page special edition features work from several photographers. Alongside Moir and Peeters is the work of Kate Geraghty, Justin McManus, Alex Ellinghausen and Eddie Jim. Editor Katrina Strickland said the work reflects the dedication of the title to covering the stories important to Australians.

“Good Weekend is all about delivering stories on what’s important to Australians – and right now there is nothing more important than the bushfires sweeping our beautiful country,” says Strickland.

“Staff photographers from The Sydney Morning Herald and The Age have been covering the crisis all summer and their pictures really are worth a thousand words. Our 16-page wraparound uses their work to tell a story of what’s been lost, the human and animal suffering amid the devastation, and the amazing work of those who put themselves in the line of fire, literally, on behalf of us all.”

Prints of some of the photographs used in the story can be purchased from The Store with profits going to NSW RFS, CFA VIC and WIRES. 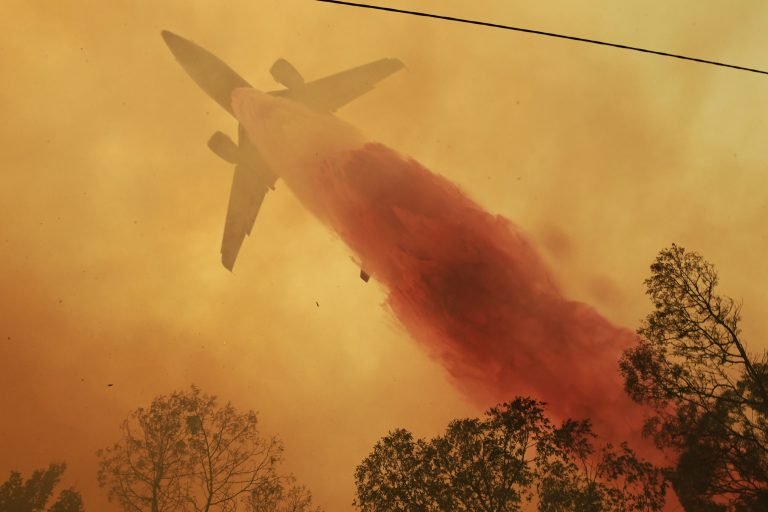 Michael Gate was doing his best solo against the fury of the Green Wattle fire in Orangeville when the cavalry arrived in the form of the VLAT.
Photo Nick Moir 6 Dec 2019 / Sydney Morning Herald

As for Moir and Peeters, they’ll be heading back out into the fires over the coming weeks, the season showing no sign of improving.

“[When I’m at the scene of a fire] I’m pretty calm, but in the lead up to the day I am highly anxious. Looking at the weather apps, throwing out worst-case scenarios, looking at all these possibilities. Knowing how far a fire can travel and knowing the fire services [are] way beyond overstretched,” Moir said.

“You’re just looking at something that could burn to the ocean and destroy hundreds, if not thousands, of homes. And then you have the anxiety of knowing you’re going to put yourself right in front of that.

“News photography is about impact and doing what words can’t. Which is everything, pictures are always better than words. If I could speak in pictures, I would.”

Nick Moir and Wolter Peeters spoke to Hannah Blackiston and Brittney Rigby on the Mumbrellacast. Listen to the full interview here.

‘Nothing can prepare you for it’: Sydney Morning Herald photographers on covering the Australian bushfire crisis from the front-line