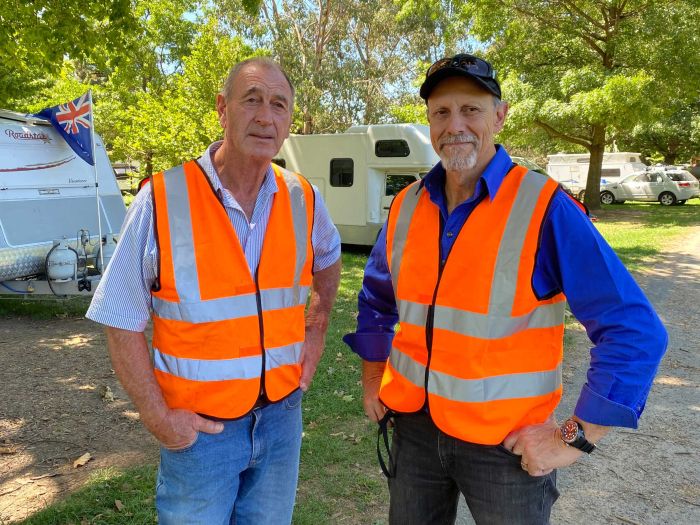 Grey nomads cannot do all the heavy lifting when it comes to rebuilding fences in bushfire-affected country; it is young backpackers who are needed to bolster the workforce.

That’s the call from Tumbarumba BlazeAid camp coordinators Garry Wilson and Rob Golgini, who are desperate for more people to join their camp in the NSW Riverina Highlands.

“We have been flat out, we have already reached over 100 properties that have been damaged by fire,” Mr Wilson said.

“We would have replaced over 1,000 kilometres of fencing already, but there is so much more to do.”

BlazeAid is a volunteer-based organisation that works with communities in rural Australia after natural disasters to rebuild fences and other structures that have been damaged or destroyed.

There are between 700 and 1,000 volunteers working across 33 camps in NSW, Victoria and South Australia that were impacted by bushfire, but the organisation would ideally have 2,500 people on the ground each day. 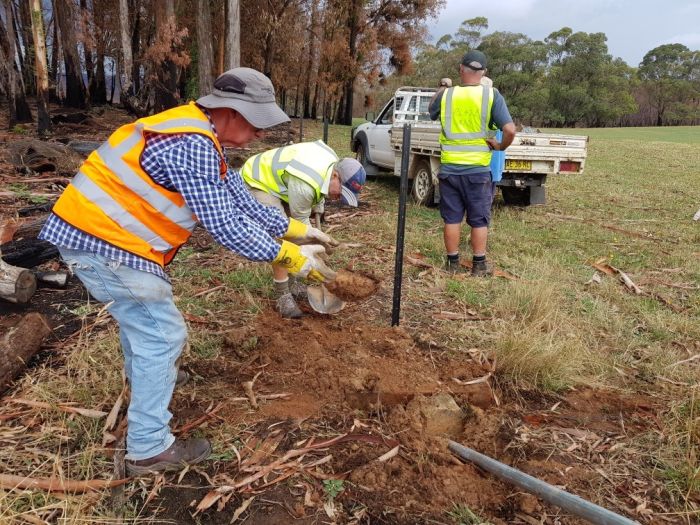 Grey nomads make up the majority of the Tumbarumba BlazeAid workforce. (Supplied)

Mr Wilson said he was concerned that once the cold weather hits the NSW High Country, Tumbarumba’s BlazeAid workforce would be diminished.

“Winter is coming and all of our volunteers are caravanners, and as soon as it gets cold they are going to head north,” he said.

In a bid to get more people on the team, they have been advertising on noticeboards and shop windows in highlands towns and larger centres such Wagga Wagga.

“Truly, we could have 200 fit people for 12 months and we probably won’t get through what we have got to do,” Mr Wilson said.

“The thing is, farmers need fences now — not in six months’ time.” 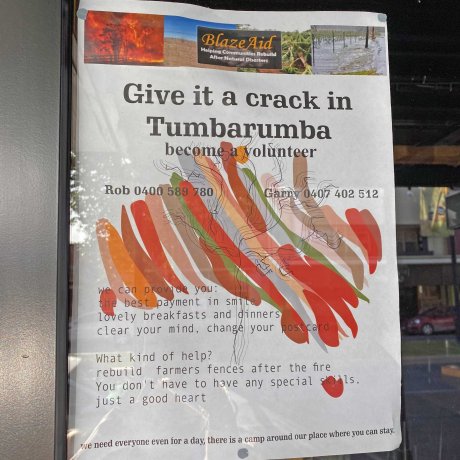 ‘Backpackers need to be paid’

Mr Wilson said while grey nomads made up the bulk of the BlazeAid workforce, he believed backpackers were needed to get the huge recovery task completed across the fire-affected states.

Under the changes, regional employers are able to hire backpackers for a year — up from six months.

Volunteer work helping rebuild fire-ravaged properties and businesses will also be counted in the visa scheme, in which they must complete 88 days of work in regional Australia.

“The Government has done a really good job in extending the visas for backpackers,” Mr Wilson said.

“But backpackers need money; they come to Australia to do some work and get enough money to move to the next place and just keep moving around Australia.

“To extend their visa means they are going to need some money to live.” 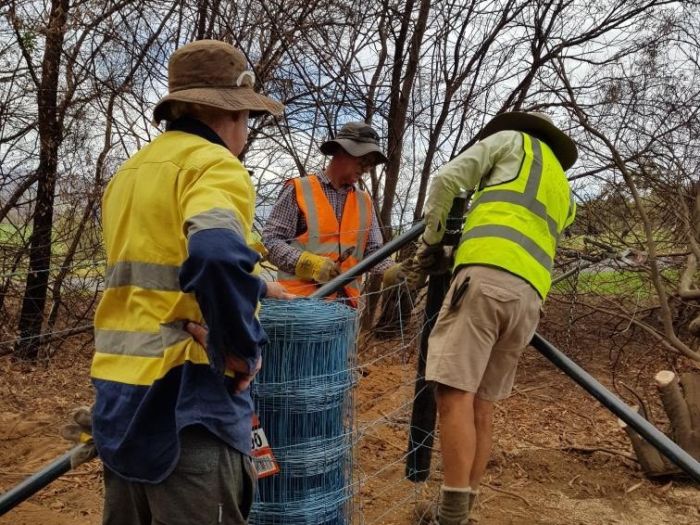 Volunteers have been rebuilding fence lines in the NSW Riverina Highlands. (Supplied)

He called for the Commonwealth to offer a paid incentive for backpackers, similar to Newstart allowance.

“The State Government has introduced a payment for NSW Rural Fire Service volunteers, so I think we need an initiative like that,” he said.

“It’s not rocket science; politicians have just got to pick up the phone and talk to each other, just get it done, don’t put it off.

“We have the fencing material, but we can’t deliver it because we simply don’t have the labour.”

Mr Golgini agreed that a change in tack was needed.

“What we are doing now due to the size [of the disaster] is not working,” he said.

“We need young people on board, as we are working in some hard mountainous country and it’s going to get cold very soon and we need to get this done.” 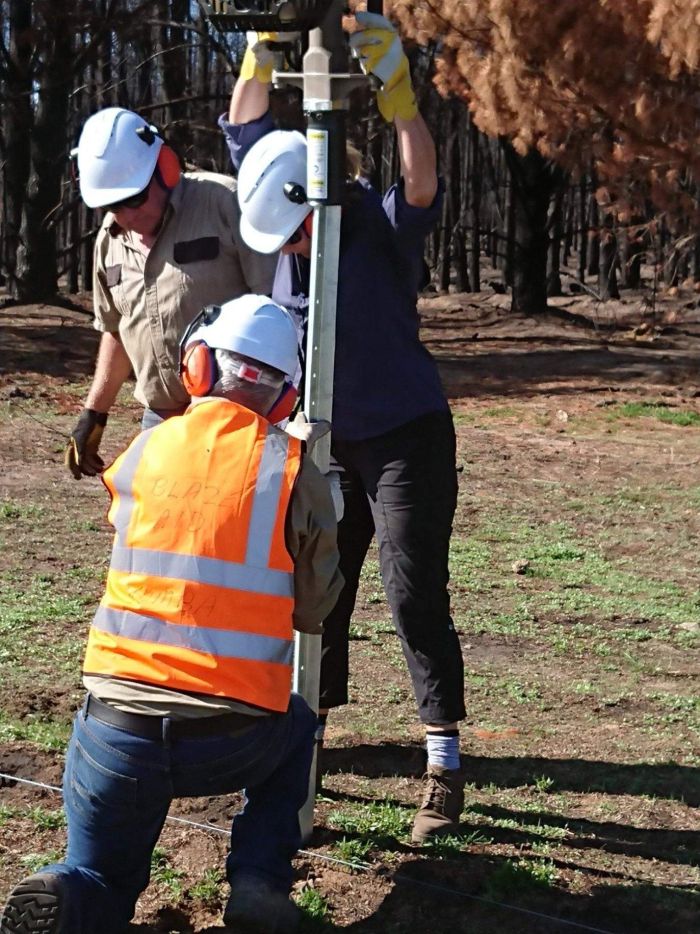 The team in Tumbarumba would like at least another 100 volunteers. (Supplied)

He said the Tumbarumba camp had a fantastic team of about 20 volunteers but more were urgently needed.

“We will feed and water people three times a day. It is a great camp.”

The ABC asked Employment Minister Michaelia Cash if the Commonwealth could provide financial support to backpackers working with volunteer organisations like BlazeAid to increase its labour force.

In a statement, Senator Cash said the Government had provided recovery grants of up to $50,000 to fire-affected businesses and loans of up to $500,000 as stimulus to keep and encourage jobs growth in devastated areas.

She added that the Commonwealth was working closely with the states to ensure the funds were dispersed as quickly as possible. 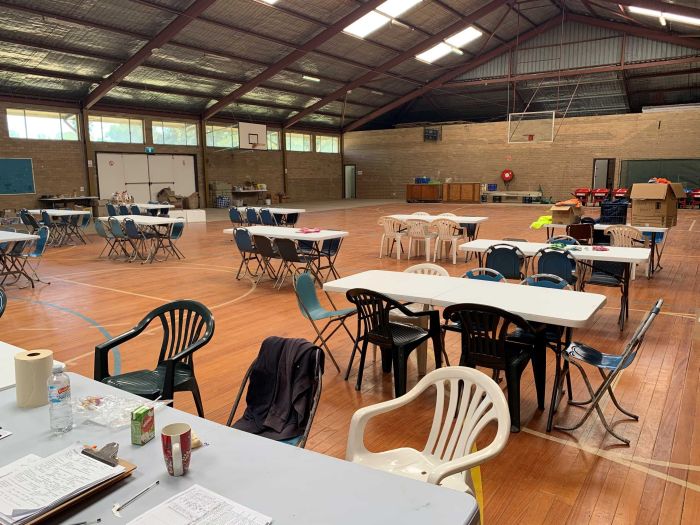 The camp has set up base inside the basketball stadium at the Tumbarumba showgrounds. (ABC Rural: Cara Jeffery)

“The recovery will be driven locally by local workers and communities, but this will be a massive recovery effort and we want businesses and charitable organisations to have as many boots on the ground as they need,” the statement said.

“The Federal Government already has incentives in place to encourage job seekers to move to areas with labour shortages, with up to $9,000 available to Australian jobseekers willing to move for work.

“Working holiday makers/backpackers inject around $3 billion into the economy each year, most of which is spent in regional areas. On average, they spend over $10,000 per visit.

“They spend every dollar they earn while in Australia, and in addition to the savings they bring here, they create more jobs for Australians in our tourism and hospitality industry.”

Deputy Prime Minister Michael McCormack and David Littleproud, the Minister for Agriculture, Drought and Emergency Management, both declined to comment.