WA fire: 22 days and still out of control

WA fire: 22 days and still out of control

The Great Southern and Goldfields regions of Western Australia aren’t as highly populated or perhaps publicly visible as the east coast but it’s important for all to be aware that hundreds of volunteers from Bush Fire Brigades all around the State have been working around the clock since 16 December 2019 to get on top of fires that have cut road access between WA and the rest of Australia.

Still listed as out of control, the major fires currently are burning around Salmon Gums and Balladonia in the Shires of Dundas and Esperance.

It is hot and difficult work with daytime temperatures reaching 48 degrees celsius.

Bushfire Volunteers President Dave Gossage who has been on the fireground for a week sent the photo of two City of Swan volunteers proving that the unique and innovative methodologies that make our Bush Fire Service so great is alive and well – this time being the use of a tree branch to help with cabin cooling and pest control! 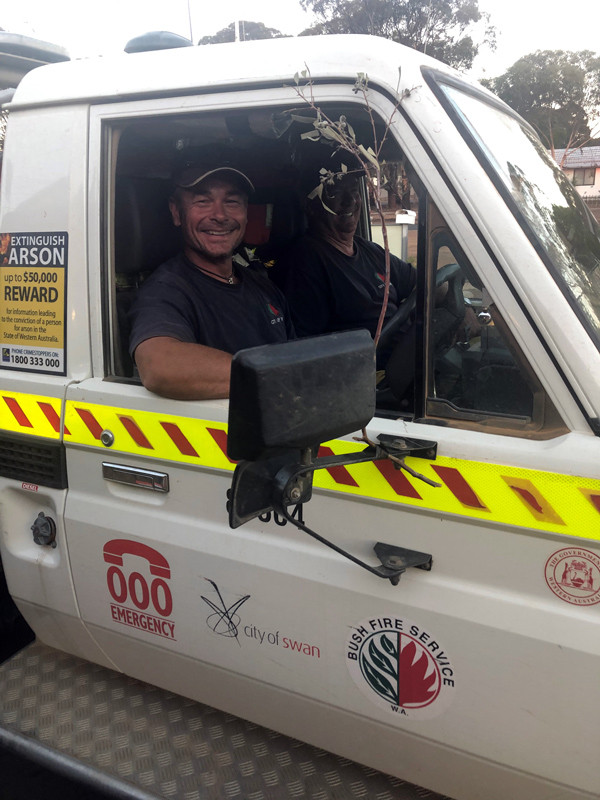 As you can read in the Facebook post from our friends at the Independence Group below, the 3 week old fire has caused enormous amounts of damage and devastation to the local environment and cost many travellers and businesses millions of dollars in lost time and stock.

Our colleagues in NSW, Victoria, Queensland and South Australia certainly need all the help and support they can get right now.

However, when you see footage of the challenging circumstances playing out under the spotlight of the world’s media, please remember that for many West Australian Bushfire Volunteers, Christmas and New Years Eve was spent quietly doing what they always do for the rest of us so well – and in this case, will probably continue with the rather unglamourous blackout work required long after this fire is brought under control.

Thank you team, you are genuinely extraordinary!