The West: Heroes Welcome / The Concerns of a Captain

The West: Heroes Welcome / The Concerns of a Captain

Below are two excellent articles that appeared in today’s The Weekend West. Please encourage everyone you know to buy a copy of The West today and read these and other powerful articles about bushfire from around the country. 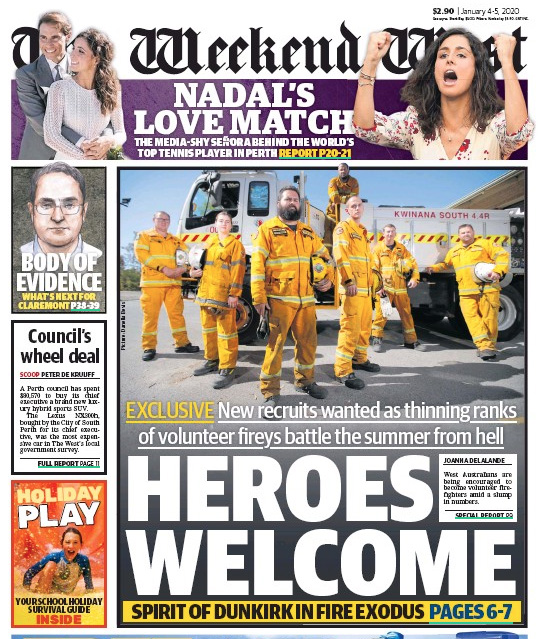 West Australians are being encouraged to become volunteer firefighters amid a slump in numbers.

West Australians are being encouraged to step up amid a significant decline in fire and emergency service volunteers, with smaller crews fighting larger and more severe bushfires.

The Great Southern region, which has the biggest volunteer force in the State, lost more than 1000 members during that period, as did the Mid West-Gascoyne region, which went from 3891 volunteers to 2461.

Former Jandakot MP Joe Francis, who spent four years as emergency services minister in the Barnett government and is a volunteer firefighter, said the fall in numbers could be attributed to people moving away from the country and younger generations less inclined to volunteer.

While not yet at crisis point, Association of Volunteer Bushfire Brigade State president Dave Gossage said the decline in volunteers meant some brigades struggled with fires that burnt for a long time. “Our ability to respond is still there but it affects our sustained capacity and surge capacity,” he said.

Mr Gossage claimed the financial cost of volunteering and a poor relationship between volunteers and DFES contributed to the dwindling numbers.

Opposition Emergency Services spokesman Steve Thomas said the relationship between DFES and volunteer firefighters had been “strained” for a number of years.

“The critical issue is volunteers in regional areas are usually the first responders but when DFES turn up and take over the fire, there has been a tendency to push the volunteers to one side and put their own crews in,” he said.

Mr Thomas stressed that the DFES approach was understandable because volunteers responding to fires affecting their own communities were usually prepared to take more risks, potentially endangering their lives.

DFES commissioner Darren Klemm, pictured below, said volunteer numbers had declined slightly across the nation in the past decade, not just in WA.

“However, over the past three years emergency services volunteer numbers in WA have stabilised at roughly 26,000,” he said.

“We are confident that WA has the resources necessary to respond to incidents across the State.” Mr Klemn said he had found the relationships between volunteers and DFES staff “extremely positive”.

Emergency Services Minister Fran Logan encouraged people to visit the DFES website to check for volunteering positions that might suit them either on the frontline or behind the scenes.

“As regional populations age and people move away, it naturally leads to less people available to volunteer,” he said. “But that doesn’t mean that people don’t still have that commitment to help out their community.”

It comes as Prime Minister Scott Morrison announced eligible volunteers with the NSW Rural Fire Service would get compensation if called out for more than 10 days this fire season.

He said other States and Territories would be offered access to the scheme.

A State Government spokesman said Premier Mark McGowan had spoken to Mr Morrison about the package.

“Mr Logan will be writing to the Federal Government to request more information on how the compensation package would work for WA volunteers,” he said. “The State Government will assess it further, ahead of it being discussed as part of the Council of Australian Governments in March.”

CONCERNS OF A CAPTAIN 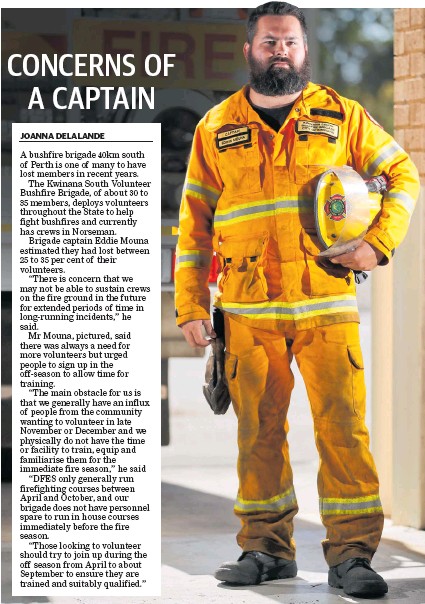 A bushfire brigade 40km south of Perth is one of many to have lost members in recent years.

The Kwinana South Volunteer Bushfire Brigade, of about 30 to 35 members, deploys volunteers throughout the State to help fight bushfires and currently has crews in Norseman.

Brigade captain Eddie Mouna estimated they had lost between 25 to 35 per cent of their volunteers.

“There is concern that we may not be able to sustain crews on the fire ground in the future for extended periods of time in long-running incidents,” he said.

Mr Mouna, pictured, said there was always a need for more volunteers but urged people to sign up in the off-season to allow time for training.

“The main obstacle for us is that we generally have an influx of people from the community wanting to volunteer in late November or December and we physically do not have the time or facility to train, equip and familiarise them for the immediate fire season,” he said

“DFES only generally run firefighting courses between April and October, and our brigade does not have personnel spare to run in house courses immediately before the fire season.

“Those looking to volunteer should try to join up during the off season from April to about September to ensure they are trained and suitably qualified.”