The Peel region will be home to Australia’s first Bushfire Centre of Excellence after the first sod was turned at the site last week.

Construction will now officially commence on the $18 million purpose-built centre at the Peel Business Park in Nambeelup.

While the location currently resembles a giant sandpit, by the end of 2020 it will be a leading facility in bushfire learning and skills development for career officers, emergency service volunteers, researchers and scientists.

The centre will run courses in bushfire prevention, management and training and have specialist indoor and outdoor training facilities, collaboration spaces and an interpretive learning centre for community information.

It will collect the best research and practices from around Australia and the world, and harness the knowledge of volunteer and career firefighters who have spent decades working in the industry, to learn the best mitigation and response techniques. 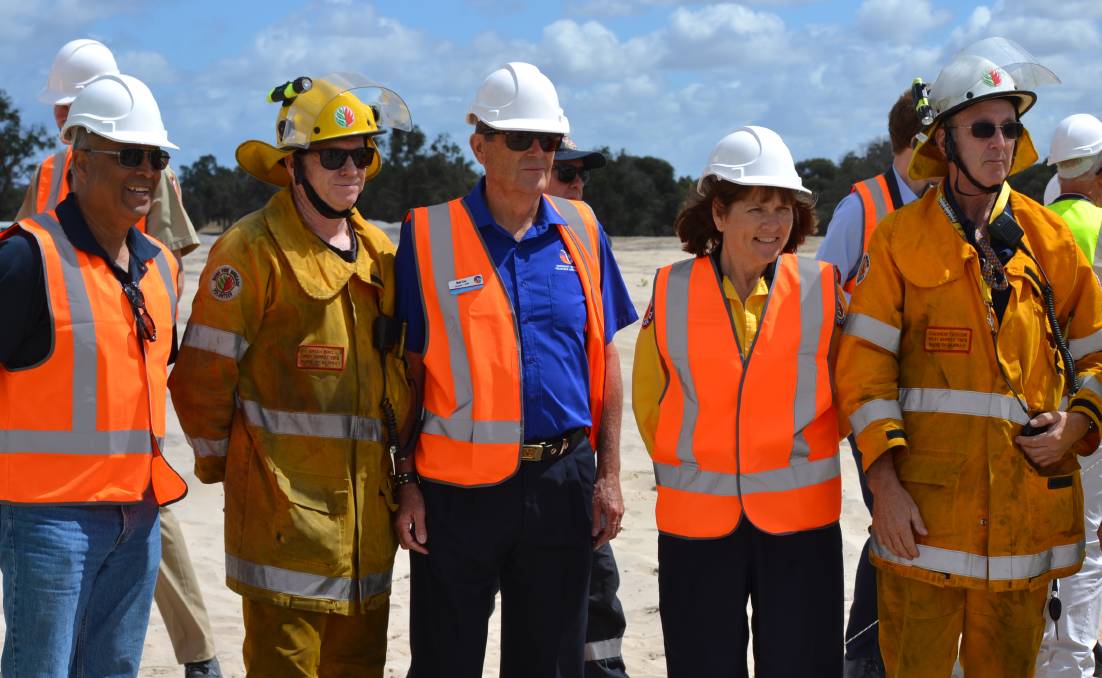 “This is a huge step forward in dealing with bushfires in WA – it’s world-leading and the first time it’s ever been done,” he said.

“Not only has Western Australia significantly increased the level of mitigation throughout the state, but our emergency services are the most collaborative they have ever been.

“Bushfires are a big issue across Australia and this puts WA at the cutting edge of educating firefighters, preventing bushfires and ensuring we have the best mitigation practices right here in WA.”

The establishment of the Bushfire Centre of Excellence was identified as a major requirement in the Waroona Bushfire Special Inquiry, with the Shire of Murray beating 13 other local councils to house the Lakes Road facility.

The first-of-its-kind centre will be built by Bunbury-based company, Perkins Builders, and funded by the Emergency Services Levy.

It is hoped the centre will become an internationally renowned hub for bushfire management learning and skills development.

Mr McGowan said the offer would now be extended to other states to use the facility to their advantage.

“The offer is now there for the Commonwealth and for other states to use this facility on a fee for service basis, but that will mean communication and cooperation between states,” he said.

“Bushfires have affected life across all of Australia – it should not be a political issue.”

Emergency Services Minister Francis Logan said the centre would not be responsible for direct responses to bushfires emergencies.

“This centre will deliver skills and knowledge in the area of bushfire mitigation and firefighting. It will undertake research into bushfires themselves, fire practices and why fires occur,” he said.

“It will bring career and volunteer services and agencies together to learn from each other and work collaboratively to lead the way in the prevention and management of bushfires.

Believed to be the first of its kind, a traditional fire program will be developed at the facility exploring Indigenous mitigation and firefighting methods.

Mr Logan said traditional burning practices would be a key focus of the centre.

“[The centre] will teach traditional bushfire fighting skills that have been practiced for thousands of years by the traditional owners of WA and Australia… and be a place of learning how traditional land owners have used fire as a tool,” he said.

“The building’s unique design of curved walls and high raking ceilings will also reflect Indigenous Australia, with the curved concrete resembling a river mouth and the roof representing the traditional humpy structure.”

Murray-Wellington MP Robyn Clarke said the Indigenous partnership was the most important aspect of the Bushfire Centre of Excellence.

“The thing I was advocating for was to ensure that Indigenous people were involved in the development, in the site, in the design of the building and, most importantly, in how to mitigate,” she said.

“We need to be listening to them and working together and I know the Bindjareb people are very excited to get on board.”

Ms Clarke, who worked closely with the Shire of Murray to lobby for the facility to be built in Nambeelup, said it was the most “logical” place for the centre.

“We’ve got the Peel Business Park which is going to create significant jobs in the region by 2050,” she said.

“There is great spirit and dedication among our emergency services volunteers in the electorate of Murray-Wellington, who have faced some catastrophic bushfires in their time.

“It’s going to be a fantastic site and I’m really looking forward to cutting the ribbon in December – in less than 11 months, this big desert will have a fantastic building right here.”

Mandurah MP David Templeman said residents should be “very proud” of the new Peel facility, which brings plenty of opportunity for international exposure.

“The Bushfire Centre of Excellence is great news for our region – we’re going to be the centre of attention in terms of bushfire mitigation,” he said.

“The relatively close location to Mandurah means that our Peel region will also share in the benefits of this new centre that will attract people from around WA, the nation, and potentially from overseas as well.

“This is a great opportunity for regional Western Australia to not only host this facility but also benefit from the research and best practice that it will gather.”

While the centre is expected to open in December, the Bushfire Centre of Excellence team have already been hard at work, introducing new training programs out of a temporary office in Pinjarra – set up in July, 2019.

To view the full concept plans for the Bushfire Centre of Excellence, visit the DFES website.