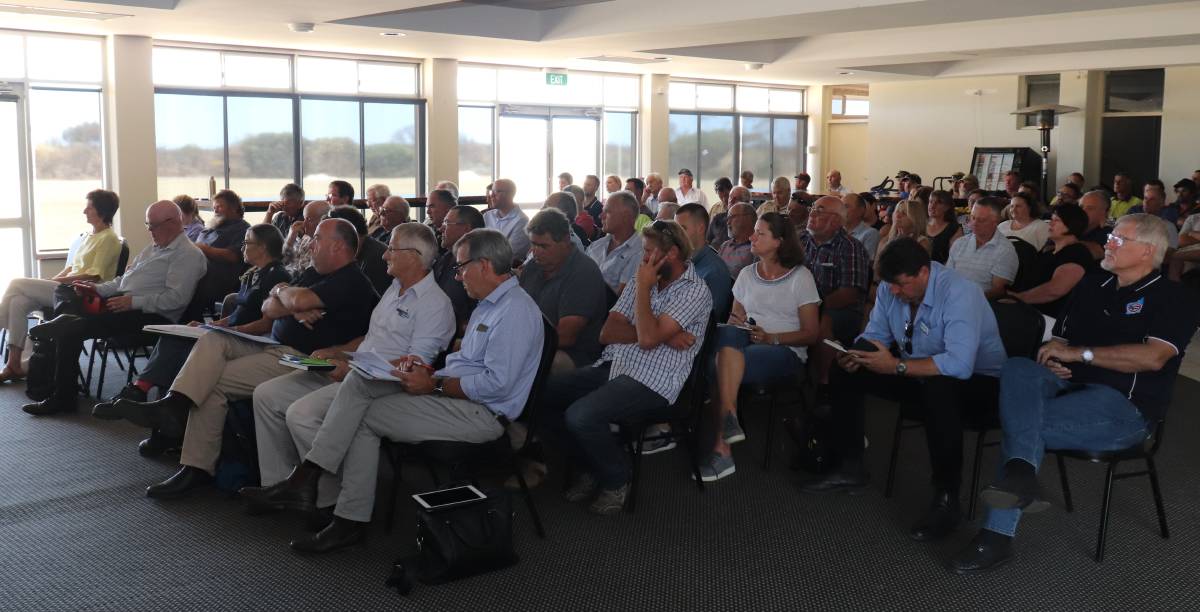 Concerned farmers attended a meeting at Newdegate last week, where they have asked for the State government to deliver better solutions to fire mitigation and water supply.

Discussion centred around how to best deal with increased fire risks and less water in rural areas, including the Great Southern region, due to an increasingly drying climate.

WITH $34.6 million (less than 10 per cent) of the $405, Emergency Services Levy allocated to bushfire mitigation in rural regions, WAFarmers chief executive officer Trevor Whittington called for the State government to increase this figure to 25pc to fund the establishment of a fully-independent rural fire service.

With 40 recommendations coming out of the Ferguson report into the deadly Yarloop-Waroona bushfires in January 2016, Mr Whittington said it was disappointing that the government had walked away from perhaps the most significant recommendation made, to set up an independent rural fire service.

“To have 1200 professional firefighters who are highly trained and very focused on an urban area and only $33m out of $405m going to support the rest of WA’s 26,000 volunteers is a complete imbalance,” Mr Whittington said.

“Having the patrol based in Perth is an imbalance, as our real risk today is out in the bush – that’s where people, property and the environment is being impacted.”

He said $100m should be allocated to the regions, to support and push control back down to the State’s volunteer firefighting brigades.

“Out of that, $25m should go directly to brigades so that they can buy the equipment they deem as necessary, whether its tankers, graders, drones etc,” Mr Whittington said.

“Another $25m needs to go to the 50 rural communities so they can build strategic water reserve supplies for their town dams and big tanks so we can get a spread of water available at 30 kilometre intervals.”

The Nationals WA Roe MP Peter Rundle agreed that the State government needed to further look at how the ESL was being spent.

“With $222m of the ESL used to pay for DFES staff and career firefighters, that leaves around $180m for basically 80pc of our other emergency services and volunteers,” Mr Rundle said.

“I understand there is an independent body being set up, and that is absolutely essential, because it’s about having the fox in charge of the hen house if you like.

“If the whole ESL levy is controlled by DFES I don’t think it’s necessarily going to end up in the right place – we need to have more input.”

Labor’s Agricultural Region MP Darren West said the majority of feedback the government had received from brigades at the time of the Ferguson report was that an independent rural fire service was not the answer.

“After consulting widely we made the decision two years ago that it was better to have a dedicated division of DFES that dealt with rural fire fighting capabilities,” Mr West said.

“Funded out of an increased ESL, that’s been a success, and I know Victoria has pretty much adopted our model – so we feel vindicated in that regard.”

With the State government recently announcing the construction of a Bushfire Centre of Excellence in the Shire of Murray, the $18m facility will be available for training for volunteers and career firefighters.

The successful local governments throughout the Pilbara, Wheatbelt, South-West and Great Southern regions will carry out 714 mitigation activities under the plan.

However former ESVA president John Iffla said it was disappointing that the Bushfire Mitigation Plan, previously developed by volunteer associations and DFES, had not been fully implemented by the State government.

“We’re about half way there, but it hasn’t really eventuated to the scope we had envisaged,” Mr Iffla said.

“It will cost the State $5m to have 25 rural bushfire mitigation officers in place and they have not put these employees on the ground.

“At the moment there’s eight planning officers, some of which are on very short-term contracts.

“We want these positions to be filled by volunteer rural fire services, people that actually understand the bush, and get all of the work done in the off season and stay in the region that they do the plans.”

“The original concept of the Bushfire Mitigation Plan was for bushfire protection zones around rural communities to better protect farmlands from fires coming out of Crown land, which is the State government’s responsibility,” Mr Iffla said.

“We want the State government to take more ownership of their problem and the best way forward is to get this Bushfire Risk Management program up and running properly.”

With farmers providing their own trucks and time in fighting fires that start in Crown land, Mr Whittington agreed that the State government needed to take a greater degree of responsibility to ensure there was sufficient water to fight the fires, saying it was an environmental issue.

WITH Australia experiencing its hottest year on record in 2019, Mr West said he believed in climate change and that the State’s farmers needed to start looking at alternative options to build their water reserves.

“I don’t think how we manage evaporation and how we’ve stored water in the past is going to work as effectively for us in the future, and we’re already seeing that now,” Mr West said.

“WA has experienced seven out of its 10 driest years on record in the past 10 years and I suspect that this dry weather is going to continue, so we need to look at alternative options to drought proof our farms, rather than just making their dams bigger.”

With 44pc of Perth’s water desalinated and only 9pc coming out of dams, Mr West said another option was for small groups of farmers to build desalination plants on their farms.

“The State government’s desalination plant at Muresk in Northam costs virtually nothing to run and the bigger these desal plants, the more cost effective they are – so we want to look at ways we can work with communities to put these desal plants in and reticulate,” Mr West said.

He pointed to Newdegate farmer Russell Orr, who created a small scale desalination plant on his farm and is producing water for about $1.2-$1.5 per kilolitre.

“That’s a lot cheaper than what you can buy from the Water Corp and that price is already heavily subsidised,” Mr West said.

With 7000 kilometres of pipeline infrastructure across the Wheatbelt struggling to keep up with demand with the drought, and farmers not having big enough dams to survive two to three years of little rainfall, Mr West said the scheme was already stretched to its limit.

“For all the water that this shire needs for stock, spraying and domestic supplies, it’s not going to keep up – so something is going to have to give,” Mr West said.

“The large fast flow standpipes are now running at $8/kilolitre, which is a reasonable price, but it’s when you start needing it for spraying, livestock or putting it on town ovals etc that it becomes a very costly exercise.”

Mr Whittington said desalination of brackish salt water was an option, but that the realistic cost of between $100,000-$200,000 per unit and getting environmental approval of waste water management were issues.

Instead he said farmers needed assistance to build 10,000 cubic metre dams to be used as strategic water reserves.

“Each farm needs a strategic water reserve that is capable of lasting three years, and we don’t have that yet,” Mr Whittington said.

“Right along the eastern Wheatbelt and the 1800km of State barrier fence there probably needs to be a strategic 10,000 cubic metre dam available every 10 kilometres to fight fires.”

Farmers at the meeting also called for the Farm Water Rebate Scheme run under the previous government to be reinstated.

Mr Rundle said the plan had been successful in encouraging farmers to improve their own infrastructure and take pressure off the scheme.

With around $20m worth of funding, farmers received grants of up to $20,000, covering up to 50pc of their projects.

However Mr West said the Farm Water Rebate Scheme had run its course.

“That scheme was discontinued for a couple of reasons – it was around for a long time and I would suspect that a lot of people that wanted to use it probably have, but I think the other reason is that all those dams are dry,” Mr West said.

“Putting more money into a scheme that is probably not going to work as well for us in the next 30 years as it did in the past 30 years isn’t a great way forward and not really sustainable.”

Mr Whittington said another practical option was to build 500,000 litre tanks at rural standpipes, to have water in reserve for firefighting.

“That would need, across Kulin and Lake Grace that has 20 stand pipes, an investment of around $10m,” Mr Whittington said.

With six water deficiencies declared in the Great Southern, it is costing the State government $4-$6m to cart 11 million litres of water every week, with that number expected to increase.

Department of Water and Environmental Regulation (DWER) manager of rural water planning Tracey Calvert said their focus in water deficiency areas was on providing water for livestock rather than spray water.

“When you’re in a water deficient time, our focus in rural water planning is from an animal welfare point of view,” Ms Calvert said.

“In normal years, when it’s full, there is enough water to go around.

“We have other areas that we call fairly sustainable at the moment for spray water – for example the Lake King community tanks.”

Over the past 12 months the DWER regulation has utilised $1.5m invested by the State government in 29 projects focused on improving water catchments, dams, bores and other community water supplies throughout a range of shires in the Great Southern region.

“Running until 2021 there is $4.6m to spend on this scheme, and funding 25pc of your water infrastructure project is better than a kick in the pants.

“You can get up to $25,000 and it does cover all of those water tanks, troughs and guttering etc and with the very high interest in the program we will be going back to the Federal government to ask for more money as well.”

Mr West said regional communities and farmers all had a role to play in making the finite water resources stretch across the dry period.

“We grew 10 million tonnes of grain last year in WA, which is very close to our 10-year average on very much reduced rainfall,” Mr West said.

“So its remarkable how farmers are becoming so much more efficient with water.

“We are now looking at new technologies and new ways to move forward in terms of how we can better manage the resource.”