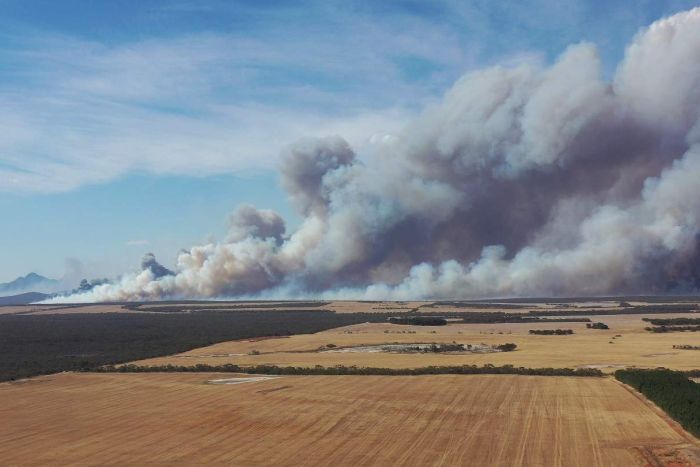 As the east coast of Australia continues to burn, firefighters on the opposite side of the country are taking stock of the disaster that could have been after a mega-blaze tore through a third of one of West Australia’s most popular national parks.

More than 200 career and volunteer firefighters spent a week battling the fire inside and on the outer edges of the Stirling Range National Park.

Now a state politician, firefighters, farmers and tourism operators are calling for more resources to help protect the tourist destination and the neighbouring communities after it was engulfed by flames for a second time in under two years.

Locals count blessings after ‘once in 20-year’ fire

Holidaymakers were among the first to be evacuated after the blaze was sparked by lightning on Boxing Day and by the weekend a massive pyrocumulus cloud could be seen from the port city of Albany, over 80 kilometres south of the mountain ranges. 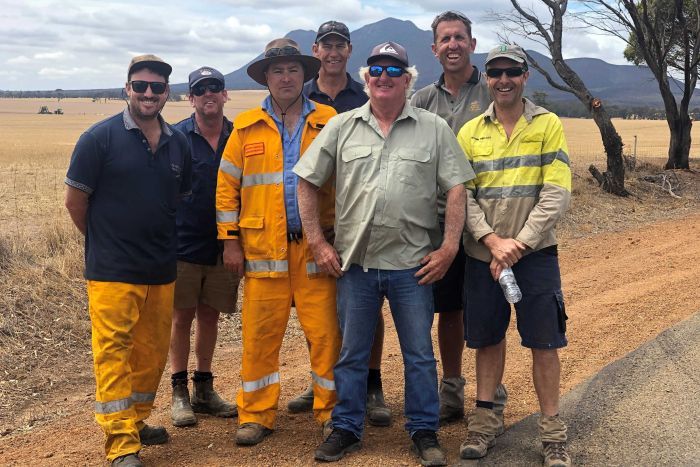 PHOTO: Wayne Davis (center), says they have been pushing for years to have a fire truck based near the popular tourist destination. (ABC Great Southern: Kit Mochan)

After winds pushed flames eastwards across the ranges crews were dealing with a 150km fire perimeter, with the blaze eventually burning through 40,000 hectares, taking out hiking trails, a park ranger hut and swathes of bushland home to endangered wildlife and endemic flora.

For farmers on its edges it could have turned out very differently and many thought it would. 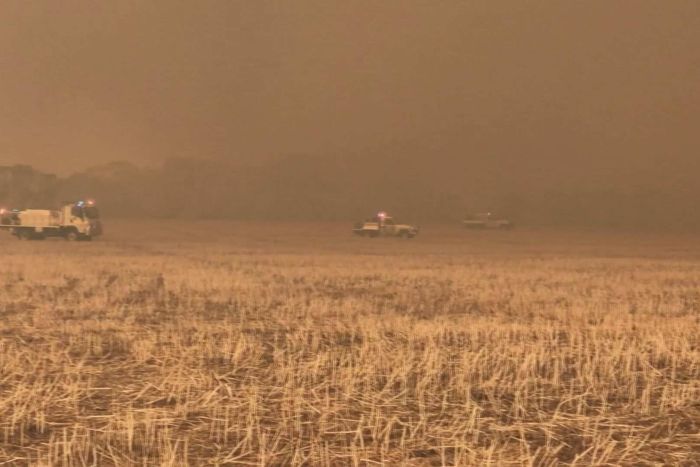 “A lot of the local landholders [that live] along the front of the park — some of them older than me — have been waiting for this time when you get a lightning strike in the hills, and [the fire] comes out,” said Wayne Davis of the Borden Volunteer Bush Fire Brigade (VBFB).

“If we had the wrong wind … the fire [could] have come out [with a] 10–15km long front [into farmland] … and there is no way we would have been able to control that.”

A group of six fire captains and firefighters told the ABC that volunteer brigades from across the state worked closely with the Parks and Wildlife Service and Department of Fire and Emergency (DFES) staff to stamp out burning embers as they blew from the blaze onto adjoining farms. 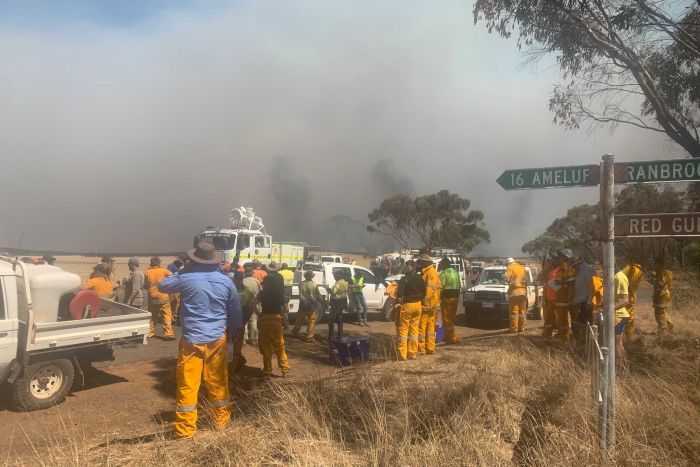 PHOTO: The fire drew a massive response from hundreds of volunteer firefighters from across the state. (Borden Volunteer Bushfire Brigade)

Some landholders made the difficult decision to backburn their own fertile farmland and, with the support of the two Government agencies, local reserves to stop the spread of the fire.

Mr Davis said the massive bushfire had underlined calls for more firefighting equipment to be permanently based near the Stirling Ranges so locals could respond quickly to fires to avert a potential disaster in the future.

“There were smiles from ear to ear that no farmland got [seriously] burnt,” he said.

“We just want to move forward with Parks and Wildlife and [DFES]. I’m sure we could get a plan together.

We need more assets down here. There’s no [heavy duty] fire truck at Bluff Knoll here — the nearest [is 30km] away.” 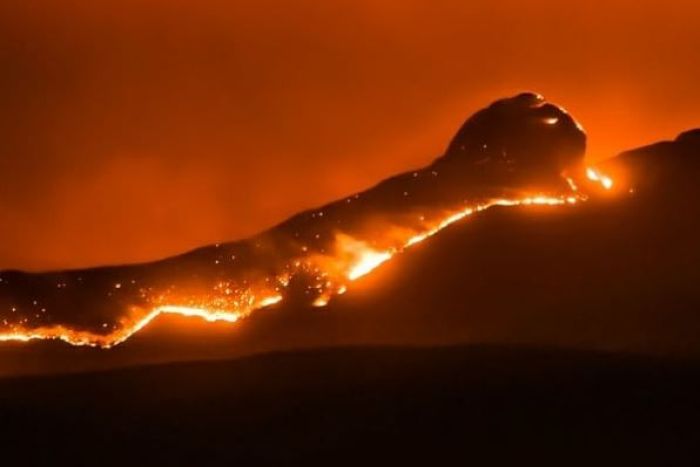 PHOTO: In 2018 an escaped prescribed burn in the Stirling Ranges resulted in 17,200 hectares being burnt inside and outside the park. (Instagram: Gasgaslex Images)

The group have started a fundraiser to build a shed for the fire truck, but need a local government and VBFB grants committee to approve the purchase of the half-a-million-dollar vehicle.

Firefighter Wayne Pech said existing nearby facilities, including a 24-hour airstrip in nearby Gnowangerup, could also be factored in when planning for bushfires in and around the national park.

“In situations like this if they need a second site [for waterbombers] to land … we can work out the best way for water to be made available for them,” he said. 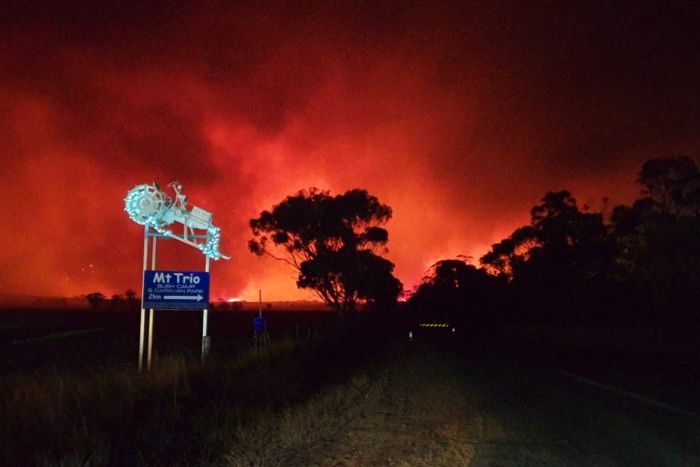 Tourism operators have echoed the calls for a locally based fire facility, pointing towards an uptick in visitors to the national park in recent years.

“It was terrifying when the fire started. One of the main concerns that we have as a tourism sector is protecting our visitors … it’s very important for us to have a quick response,” said John Burns, operator of the Mount Trio Bush Camp & Caravan Park.

“Everyone just needs to know that they’re safe when they’re camping in a natural bush environment … just the fact that everyone knows there’s a local fire team would put everyone’s mind at ease.” 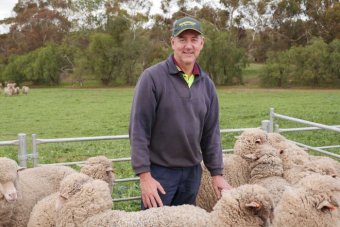 The State Parliament Member for Roe, Nationals MP Peter Rundle, said the Borden volunteers had been trying for years to acquire a heavy-duty, four-wheel drive fire truck to be permanently stationed near the tourist hub.

The Borden Volunteer VBFB treasurer told the ABC that the group had been advised by representatives from DFES in meetings dating back several years that the first stage of an application for the truck was unlikely to succeed.

“I think the Stirling Ranges have now been identified as one of our most [fire] susceptible areas in the state and I think it’s so important that those surrounding local governments and bush fire brigades are really supported well by our Government.”

An application will be lodged with a inter-government committee to approve the purchase of the fire truck. 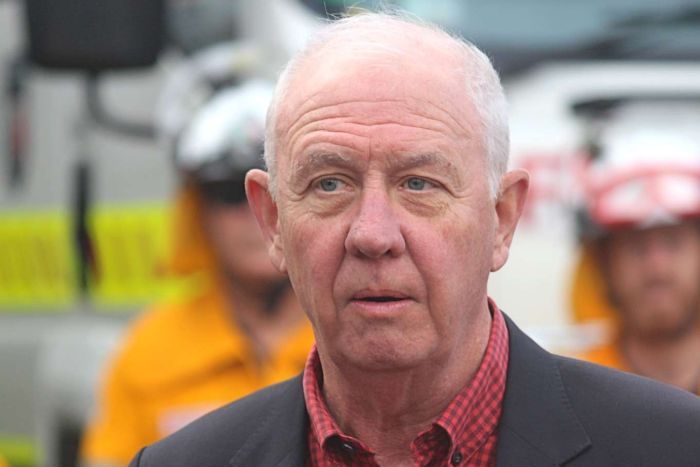 Minister thanks firefighters, says he has faith in process

In a statement Emergency Minister Fran Logan thanked the volunteer and career firefighters for their “selfless service” during the fires.

“It would have been an extremely challenging fire and I have heard nothing but praise for how well everyone worked together, including the local governments, Parks and Wildlife, DFES and the volunteers,” he said.

“I appreciate that some volunteers may feel they need more resources following events like this and I am sure that the capital grants committee, which includes local government and bushfire brigade representatives, will give any application due consideration.

“It is important for brigades to always work through their local government on requests for capital items to ensure consistency and fairness across the state.”

In a statement DFES confirmed their department and the Gnowangerup Shire were assisting the brigade with putting in an application for the vehicle.

Applications for the funding scheme close in March.