ABC: Bushfire shelter for personal and crew use prototype sails through 800C testing

ABC: Bushfire shelter for personal and crew use prototype sails through 800C testing 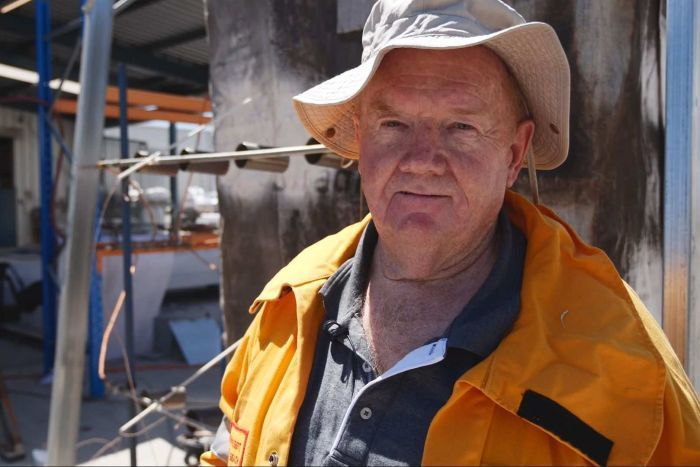 PHOTO: Chris Probert invented a bushfire shelter that promises to save the lives of firefighters at the front. (ABC Great Southern: Mark Bennett)

A bushfire shelter developed by a former West Australian volunteer firefighter has been tested to withstand 800C heat, and survived with promising results.

A $25,000 WA Government grant to demonstrate the shelter’s ability to protect firefighters has brought the invention a step closer to possibly becoming a vital shield for bushfire volunteers on the front line.

Albany-based inventor Chris Probert took the shelter he designed and built, which he calls a Shadrach, to a Perth furnace factory where it was subjected to intense heat from 30 gas burners for twelve minutes to emulate a bushfire.

“Inside it varied from about 35 to 37 degrees at floor level, up to about 45 at the top, but we really need to do more testing to give it a more accurate profile,” he said.

“It was hot, but more uncomfortable than dangerous,” he said. 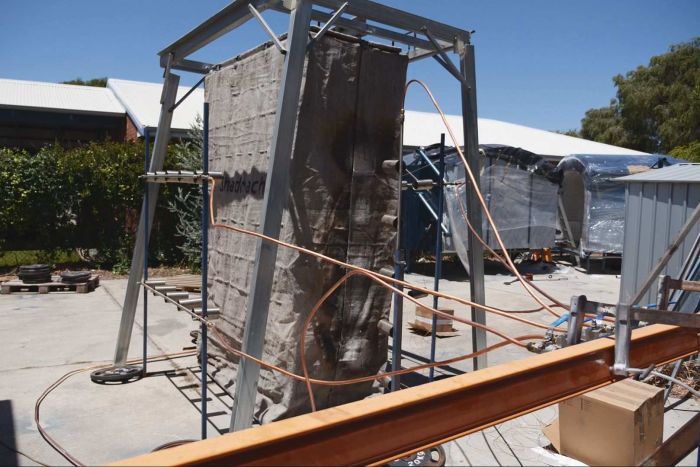 PHOTO: The Shadrach is a prototype bushfire shelter which has been tested to withstand heat of 800C. (ABC Great Southern: Mark Bennett)

Mr Probert has been working on the shelter ever since a firefighter was burnt near Albany on WA’s south coast in 2012.

Wendy Bearfoot died from her burns after her truck was incinerated in a burn over. 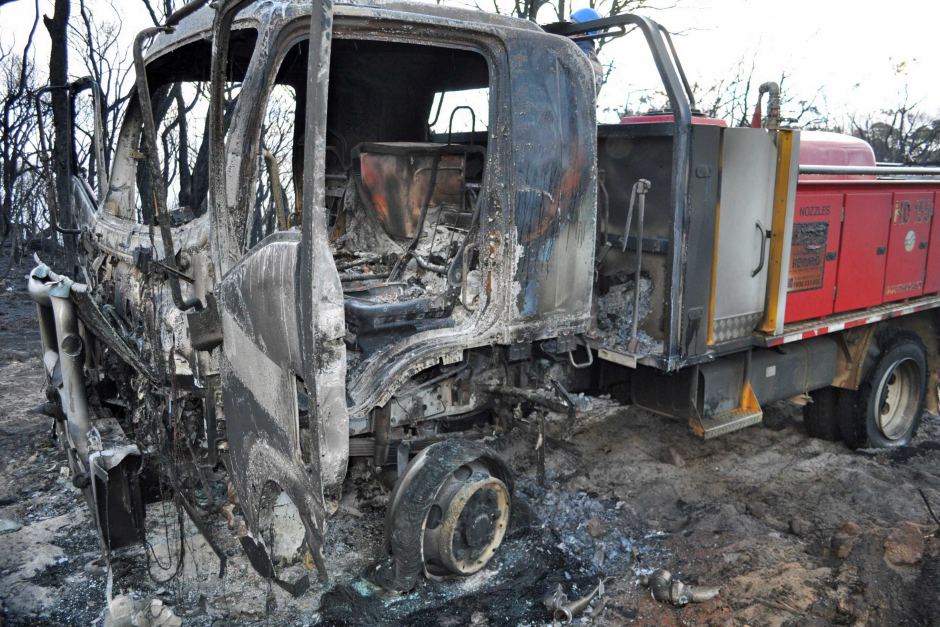 PHOTO: The burnt out remains of the truck in which two firefighters, including Wendy Bearfoot, were trapped in October 2012. (Supplied: WA Department of Environment and Conservation)

Since then protection measures for fire crews have improved, but Chris Probert believes the fire trucks, even with water dousing systems and cab heat shields, are not a safe refuge.

“The prime advantage of the Shadrach,” Mr Probert said, is that “you are out of the ‘gas chamber on wheels’ — which is what a truck is when you get a bad burn over — you are in the clear in a cleaner environment.”

The outer shell is aluminium hydroxide fibre with a stainless steel mesh to hold it in place and the inner two layers are a ceramic silicon material, commonly used in engines and furnaces.

Mr Probert has designed a frame mounted at the rear of a fire truck which slides out and allows the fabric tent to drop down around the crew to shield them from radiant heat, from flames, and to keep body temperatures from rising. 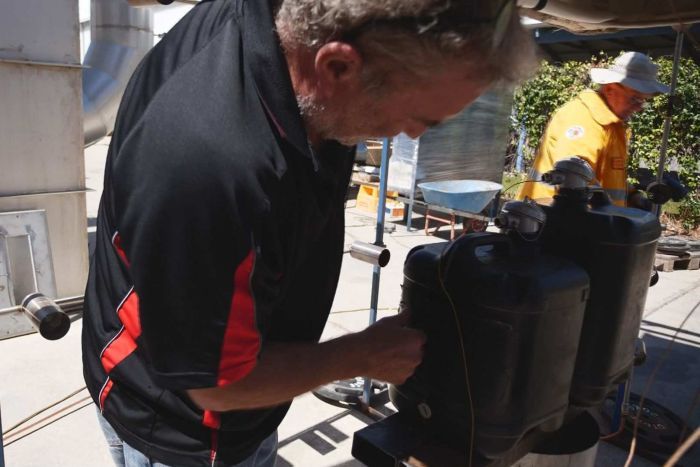 PHOTO: Water drums were placed inside the Shadrach to emulate how the human body reacts to extreme heat. (ABC Great Southern: Mark Bennett)

Part of the fire test was to measure the rise in body temperature on a firefighter, but it was done with two 20-litre drums filled with water.

“We didn’t measure a firefighter, we haven’t done that yet, but the figures that we’ve got are one and a half degrees.

“The way we did that was the CSIRO come up with this trick of having a 20-litre drum of water which behaves very much in the same way as a human body.

“So we had two 20-litre drums inside the Shadrack and we had a temperature probe inside each one, measured the temperature at the beginning and right throughout the test, and it stayed well and truly under the two degrees. So it was quite safe.

He also put a raw egg in a tray and sat it about half a metre off the floor for the test.

“Humans can withstand 60 degrees Celsius of air temperature for about ten minutes. That’s about the time it takes for an egg to turn white, to go hard,” he said.

“After 12 minutes it was runny it was just liquid, no influence on it at all.”

Armed with the temperature logging data from the test, Mr Probert will now do more testing of air quality inside the shelter. 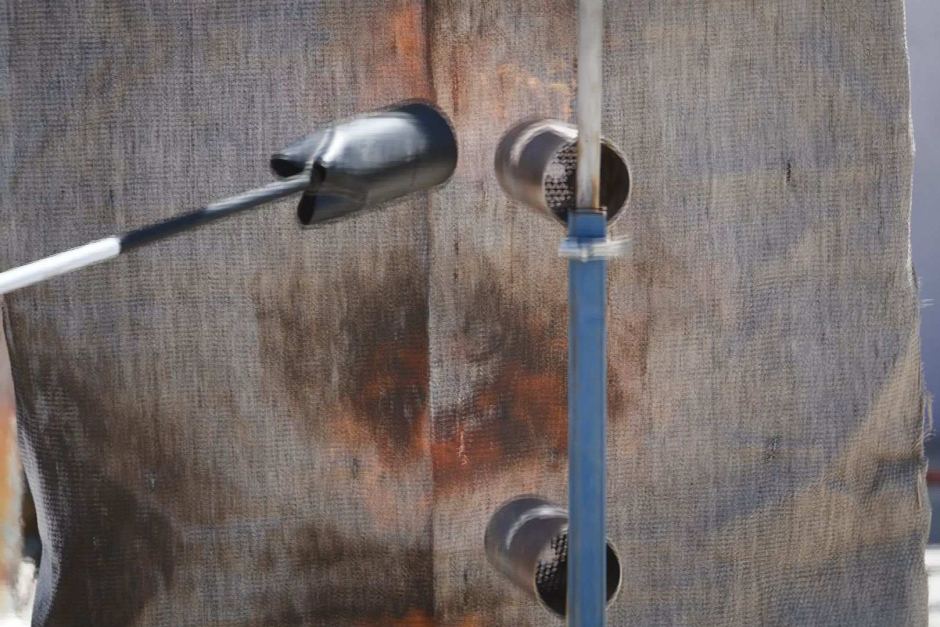 PHOTO: The Shadrach was subjected to intense heat from 30 gas burners for 12 minutes to emulate a bushfire. (ABC Great Southern: Mark Bennett)

He will prepare a report to take to state fire management agencies.

“Our aim is to arrange some kind of a collaborative deal with DFES and Parks And Wildlife because they are the major firefighting agencies in the state and they are the ones who really have to deal with the risk that exists at present,” he said.

“It’s all very well to say this thing is safe, but the agencies need numbers, they need scientific evidence.”

In response, a Department the Department of Fire and Emergency Services spokesperson said all 2.4, 3.4 and 4.4 tanker bushfire trucks in the Great Southern had been fitted with crew protection measures.

“All of the firefighting fleet have Automatic Vehicle Locators (AVL) fitted to enable real time tracking of vehicles and for crews to raise a distress alarm if they experience unpredictable fire behaviour situations,” the spokesperson said.

“Crew safety is of the highest priority for DFES and there are currently a number of research projects in place to continually improve fleet and crew safety.

“New products which are considered to enhance crew safety are of interest to DFES, however any decision to purchase a product would be subject to a fair and competitive market test in accordance with State Supply Commission policies.”