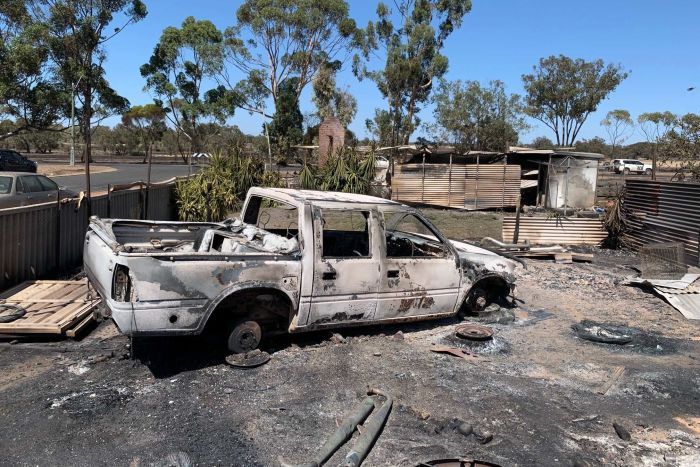 PHOTO: Machinery, sheds and infrastructure were among the items reported to have been destroyed. (ABC News: John Dobson)

At least one home was lost in a bushfire which descended on the Western Australian town of Katanning on Saturday.

The fire tore through farmland as it approached the town of more than 3,500 people in WA’s Great Southern region in the afternoon.

There were also reports farming machinery, sheds and infrastructure were lost in the blaze.

The fire was sparked by lightning on Friday but as temperatures reached more than 40 degrees Celsius in the town on Saturday, strong winds pushed the fire to emergency level.

Thick smoke hit the town around 4:00pm as fire crews and locals prepared homes along the town’s western edge.

At the peak of the fire, 300 fire fighters and a water bomber were used to tackle it. 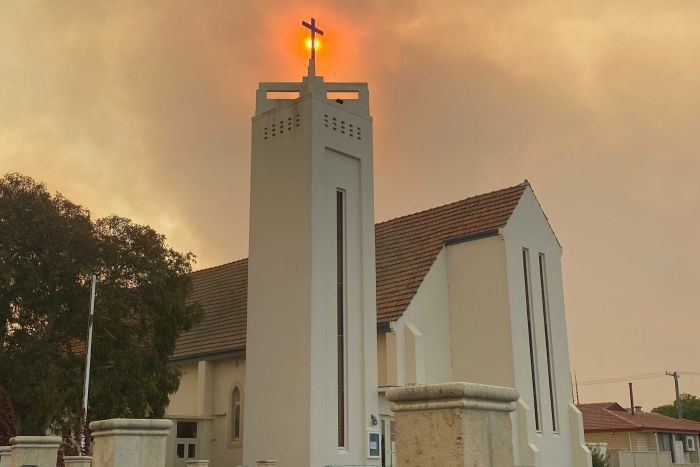 About 300 people stayed in an evacuation centre in town on Saturday night as an emergency warning was in place.

A watch and act alert remains in place for the fire, but conditions have eased on Sunday.

Adrian Richardson runs the co-op in Katanning and helped fight the blaze with the local volunteers.

His crew managed to stop the blaze on Friday night before it intensified again on Saturday.

“It was even worse on Saturday because the wind got up and it just wasn’t going to be held anywhere,” Mr Richardson said.

“It took off and virtually surrounded Katanning, when you’re behind it and all you can see is a huge ball of smoke and a red glow that’s heading straight for the town, you begin to wonder what you are going to find when you get to the other end of it.

“Luckily, it’s only got to the edge of the town and gone around it, more so than straight through it.”

Mr Richardson also said the local supermarket had lost power and a lot of food had spoiled, so he opened his co-op on Sunday to make sure people had access to fresh food.

“We’re going to have the store open for as long as people need us,” he said.

“We’ve also sent out several pallet-loads of water and supplies for the emergency service people still working on the fire and a lot of the town was evacuated and they need to be fed, so we’ve had emergency services in here picking up drinks and stuff for them.

“Not everyone has been able to get back home because of roads being closed.” 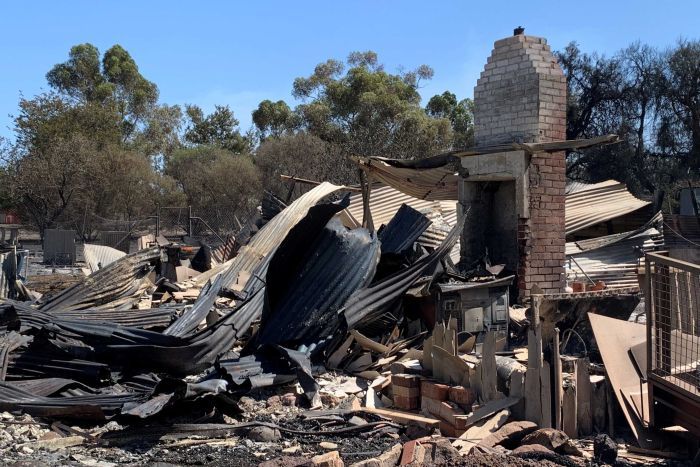 PHOTO: This home was completely destroyed by the bushfire. (ABC News: John Dobson)

“The effort from firefighters and locals was tremendous,” he said.

“Their work and the aerial support saved the town from more damage.”

“Luckily it appears no-one has been seriously hurt, which is the main thing.”

More than 100 sheep did not survive the blaze.

It was one of three major bushfires burning in the region on Saturday.