The Association that represents Bushfire Volunteers would like to formally congratulate Mr David Hughes from the Darlington Volunteer Bush Fire Brigade and recognise his great achievement of over 45 years of voluntary service to the community of Western Australia. 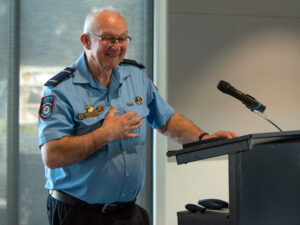 On Saturday the 12th of September, David was presented with a Bush Fire Service of WA Long Service Medal. He is now one of only three volunteer firefighters to have received this award in the Shire of Mundaring.

The Immediate Past Captain of the Darlington Volunteer Bush Fire Brigade Ricky Harvey offered some insightful comments on David’s worthy presentation of the award, “…David’s greatest legacy to this Brigade are the buildings we now call our Station. Back in 1979 the Darlington Pony Club had a shed on that site, and when rumours began that they were relocating to Eastern Hills Arena, the Brigade asked the Shire to use it. It took them a year to organise, but in December 1980 the Shire of Mundaring gifted us the ‘Shed’ (as it was affectionately known to the Brigade).

David and the late Chris Marshallshay drew up plans, and Brigade members created a 2-vehicle area with a small meeting room and kitchen. It became a very social hub for Darlington, and used by many local communities.”

Congratulations again David and thank you for your service!

If your Brigade has a story you’d like us to share, feel free to reach out to our Media & Communications Manager Sinead directly at: sinead.burke@bushfire.orga.au