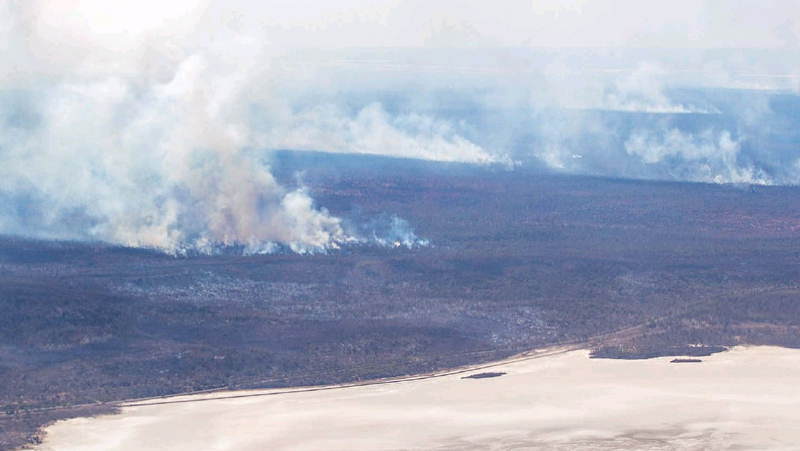 Bushfires near the Coolgardie-Esperance Highway near Norseman. Photo: Kalgoorlie Miner

The alleged politicisation of the Goldfields bushfires in January sparked an intense firefight during the first week back of WA Parliament for 2020.

Kalgoorlie MLA Kyran O’Donnell copped a spray from several ministers over his handling of the incident, while also firing off a few salvos of his own.

The to-and-fro came as a result of a motion to stand Emergency Services Minister Fran Logan down for “grossly” failing in his ministerial responsibilities.

Rising to speak on Thursday Mr O’Donnell recounted the inferno which forced the closure of the Eyre and Coolgardie to Esperance highways, causing lengthy delays for truckies and travellers on all sides of the blockades.

Mr O’Donnell said talks with State and Federal ministerial offices at the time led him to believe neither was aware of the full scale of the incident in WA.

He also accused Mr Logan of directing him not to help people from outside his electorate during the fire, a claim shot down by the Minister.

“(Mr Logan) said, ‘Kyran, let me give you some advice. These people are not from your electorate. They don’t vote for you. Move on.’ He said, ‘ Cut them loose’,” Mr O’Donnell said.

“Many people felt unfairly treated because those who had gone to the border highway were escorted through by convoy that day,” he said of the first escort through the fire zone.

“Maybe (Fran Logan and Simone McGurk’s offices) thought we were exaggerating— who knows?— but they did not seem to grasp how many people we were dealing with.”

Mr O’Donnell’s comments sparked a stunning rebuke from Mr Logan, who slammed the claims as “disgraceful”.

Mr Logan went on to detail the Liberal Party’s alleged push to turn the fires into political fodder against the State Government.

“An Upper House member of the Liberal Party told me that they had been asked to intercede in this issue to make it bad for the Government over the bushfire on Eyre Highway, and they refused to do so,” he said.

“I then had the member for Kalgoorlie advise me in our conversation that a Federal Liberal minister had also asked him to make it look bad for the Government.

“Does the member for Kalgoorlie remember I said that to him? I was pleading with him to stop getting involved.

“I was telling him to do the right thing and send those people to the professionals. That is what I said. It is disgraceful that he put himself in there.”

Mr O’Donnell said he had never politicised the matter.

“The frustration really came when the member for Kalgoorlie, as well-meaning as he may have been, essentially focused on trying to relay information himself, not only about the fires, but what was happening with the road closures, and not referring people to the emergency services website,” she said.

“He really needed to direct people immediately to get the most up-to-date information that could be available from the emergency services website, rather than trying to co-ordinate that himself.”

Ms McGurk backed the assertion Mr O’Donnell had been pressured to politicise the incident.

She said Mr O’Donnell should be commended for his efforts.