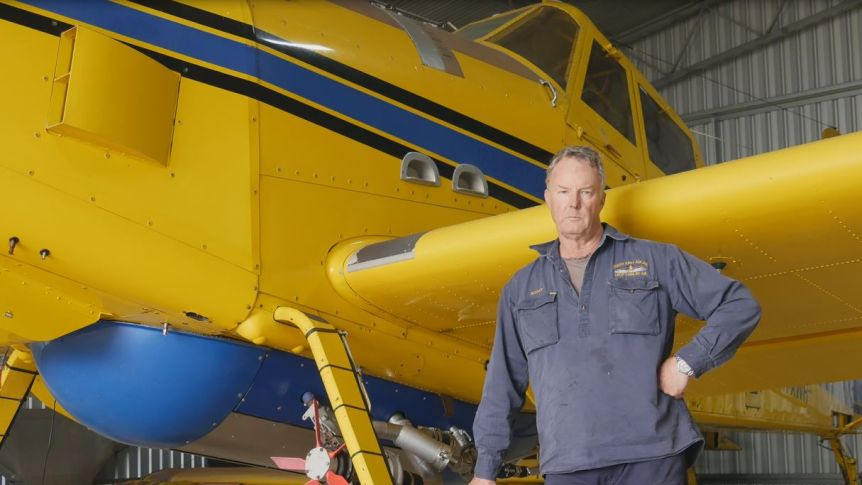 Scott Mackie and his water bomber plane, which are not contracted to fly around Esperance.(ABC Esperance: Emily Smith)

The only plane designed for water bombing based permanently at Esperance Airport will remain grounded if an out-of-control bushfire broke out near the West Australian town — a town still reeling from deadly fires in 2015.

So would the pilot with 34 years’ experience who spent part of last summer water bombing massive fires near the Snowy Mountains in New South Wales.

Instead, Esperance would be forced to wait as state-contracted water bombers flew in from Albany, about 480 kilometres away.

And if those aircraft were busy — as they were when bushfires broke out near the town in 2015 and killed four people — then perhaps some would be deployed from Perth, almost 700 kilometres away.

Since those deadly bushfires, an extreme weather forecast may see some water bombers sent to Esperance to be on standby, but only if they were not already busy fighting fires elsewhere. 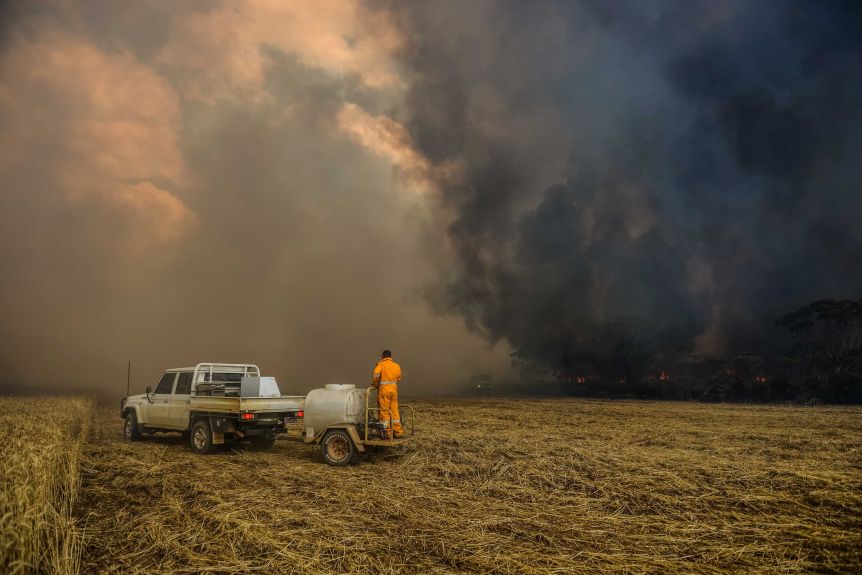 Four people died in bushfires near Esperance in November, 2015.(Supplied: Department Of Fire And Emergency Services)

Scott Mackie, who has a firefighting qualification from the Civil Aviation Safety Authority (CASA) and can drop 3,100 litres of water at a time out of his Air Tractor AT-802F, would love to be able to put his skills and equipment to use if there was a bushfire emergency in the region.

He has never been brought in to help before and said that was for one simple reason: “We don’t have a contract.”

“There is no contract for basically call-when-needed people like myself,” Mr Mackie said.

“There’s just one contract for the whole state of Western Australia.”

Mr Mackie said while the company contracted with the Department of Biodiversity, Conservation and Attractions (DBCA) did a great job, he thought it would make a lot of sense if he could help in emergency situations.

“I think that would be a fantastic idea. The 2015 fires were devastating. We lost some good people,” Mr Mackie said.

“If things were different and could have been done differently, maybe we might not have had that tragedy.”

But setting up such an arrangement with Mr Mackie would be complicated.

In south-west WA it has eight of these aircraft at bases in Jandakot, Bunbury, Manjimup, and Albany.

The department would not disclose the value of the contract, saying it was commercial in confidence.

It also manages a contract with the National Aerial Firefighting Centre, funded by federal and state governments, for two water bombers based in Albany, also delivered by Dunn Aviation.

DBCA’s decision to contract just one company for water bombing work sets WA apart from jurisdictions like New South Wales, where multiple companies are contracted to work across the state.

Asked what would happen in a large-scale emergency, when one company could not handle the load alone, a DBCA spokesperson said Dunn Aviation would be asked to bring in extra water bombers, which could include Mr Mackie.

But it seems the department would not contract Mr Mackie directly.

Jon Broomhall, from the Department of Fire and Emergency Services (DFES), pointed out that under the Bushfires Act (1954) local governments have a responsibility to respond to fires on land they manage.

That means Mr Mackie could be contracted directly by the local council — as long as it foots the bill.

The Esperance Shire Council has been hesitant to enter into an agreement with any private water bombing contractor, saying it does not have the expertise, resources, or funding to do so.

Once aircraft maintenance, fuel — which Mr Mackie said can cost between $600-800 an hour — and other costs are taken into account, the cost of one water bombing run could be significant.

The Esperance region’s Bushfire Advisory Committee urged the council to review this stance, and the shire council recently said it would look into it.

But it also raises questions as to why a local government, and not a state department, should be taking on this responsibility.

Past experience has proven the worth of water bombing to the community with Coroner Sarah Linton, who investigated the 2015 bushfires, concluding the lack of available water bombers was a major issue. 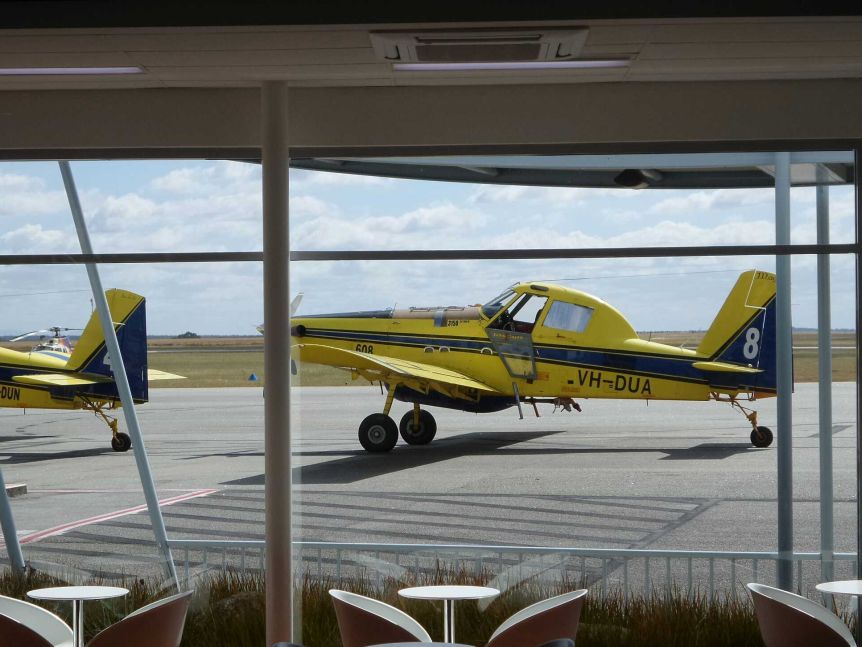 Experts said that water bombers, in nearby Albany at the time of the deadly 2015 Esperance fires, could have slowed the blazes’ approach.(ABC News: Kendall O’Connor)

Since then, a new policy has been introduced where water bombers are flown to Esperance if extreme weather is forecast so they are in town and ready if needed.

Last bushfire season, water bombers were pre-deployed to Esperance and Ravensthorpe for 10 days in total, usually in pairs.

DBCA would not say how much this cost taxpayers, citing commercial in confidence.

Another factor affecting this policy is the availability of water bombers.

Ms Linton recommended about $800,000 be set aside by the State Government to base water bombers in WA’s Wheatbelt, hundreds of kilometres to the north-west of Esperance.

This is because DFES suggested the Wheatbelt was centrally located during the harvest season, which presented a higher fire risk.

But Ms Linton also said that unless Esperance had its own resources other areas would always “get in first” in a widespread fire emergency.

She said having local water bombing aircraft available was a practical option.

‘Worst most of us had ever seen’

When Harley Mckillop, the chief pilot at Pay’s Air Service based in Scone in New South Wales, called on Mr Mackie to help with water bombing earlier this year, he said they were up against “huge, out of control” fires.

“Probably the worst most of us had ever seen,” he said.

“We were getting busier and tireder and fatigue was setting in. So it was quite a long season, even before we called Scott [Mackie].” 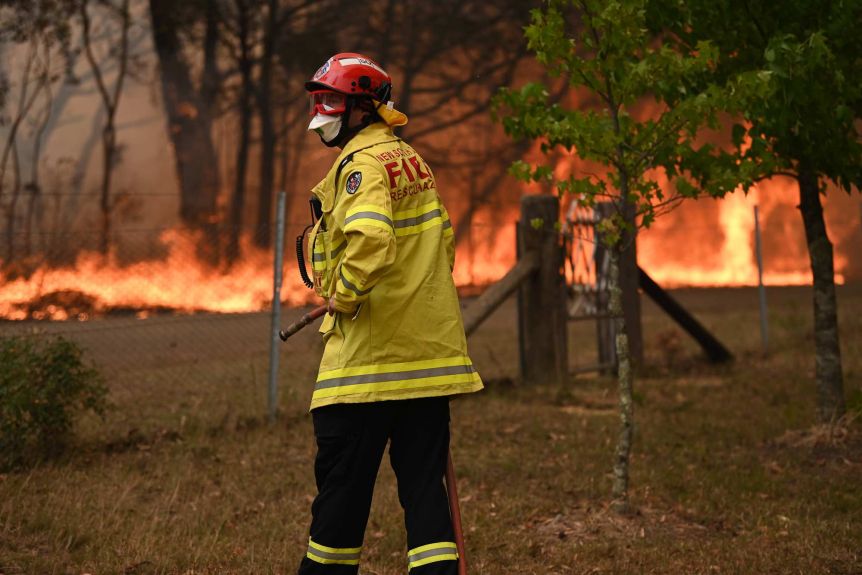 Mr Mackie said there were times, during the three weeks he spent water bombing those fires, where he asked himself “just what the hell” he was doing there.

“The fires were just moving so fast,” he said.

“And it actually got to the point where we could not continue to operate there.”

Yet the work was not entirely new to Mr Mackie. He spent three seasons working as an aerial fire spotter in WA back in the 1980s.

“Our job was to fly these little Piper Cubs and look for fires, and if we found them we had to plot their location within a hundred feet. Mind you, this was all before GPS,” he said.

He said the experience was “invaluable” in his recent water bombing work.

Despite his 34 years in the sky, he said he left NSW having learned a lot and with satisfaction at having been able to help out.

“It felt like we were really doing something important and hopefully we were able to save quite a few properties and lives in that battle,” he said.

His only hope now is he would be able to do the same for his own community.

“I honestly think that we are slowly working our way towards a positive outcome,” he said.

“I’m hopeful something of value will come about, eventually.”