Farm Weekly: Hot under the collar

Farm Weekly: Hot under the collar 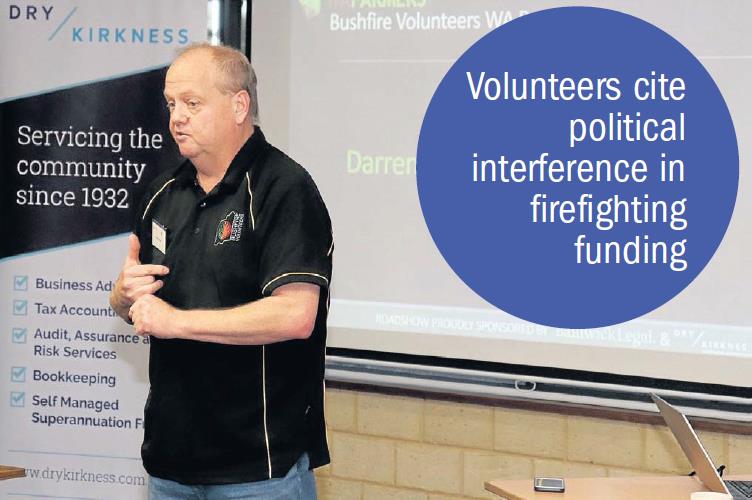 Bushfire Volunteers represents the bushfire brigades under the Association of Volunteer Bushfire Brigades of WA Inc and its executive officer Darren Brown has called for the government and Department of Fire and Emergency Services (DFES) to show greater transparency in how the ESL is spent.

ESL is a government charge applicable to all WA properties and collected by local governments on DFES’s behalf.

Despite DFES previously stating that 100 per cent of the levy is being spent on frontline fire and emergency services,

Mr Brown is concerned this was not the case.

“The State government, including the previous Barnett government, has slowly but surely eroded DFES’s treasury and annual budget from consolidated revenue and made it more reliant on the ESL,” Mr Brown said.

“I think DFES receives about $30 million of non-ESL funding, so their total budget is about $440m, with $406m of that the ESL and it is expected to cover all of its corporate services out of ESL.

“That’s a problem for us because every cent of the ESL should be going towards the State’s frontline emergency and fire services.”

“The ESL has been proven to be a fair and equitable method of raising funds for our State’s emergency services and it has overwhelmingly helped regional communities with support beyond the capacity of their revenue base,” Mr Logan said.

“There is already the highest level of scrutiny of the expenditure of the ESL through the parliamentary and budgetary processes, which are all public.

Mr Logan said the DFES annual report listed in “exacting detail” where the ESL was being spent, including the number of firefighting appliances, infrastructure and the total litres of fire suppressant dropped by the aerial fleet in a season.

However, Mr Brown said he was concerned the ESL was becoming a “slush fund” with the State government determining where the ESL funds were spent, based on political priorities.

“We argue that the ESL funding should be based entirely on risk – there should be no politics in it, but the sad reality is it’s becoming much more like the lottery commission’s money, where we’re seeing MPs handing out big cheques,” Mr Brown said.

“We just went to two openings of brigades in the South West on the weekend and there was a candidate for the next election at the opening of a brigade.

“The issue is if there is some sort of political influence then the money is probably not going to where the risk is and if there’s not, then MPs shouldn’t be there claiming credit for it.”

Mr Brown also highlighted the State government spending more than $100,000 of the ESL to install public art at new fire stations in January this year.

Under the government’s Percent for Art Scheme, which requires up to one per cent of the construction budget for new public buildings costing more than $2m to be spent on artwork, the money was allocated to the public art installations at the Cockburn Career Fire Station and the Vincent Fire Station.

“A lot of our brigades don’t have water connected so that means when there’s a call they jump in the truck, drive two kilometres to the stand pipe and then they go to the fire,” Mr Brown said. 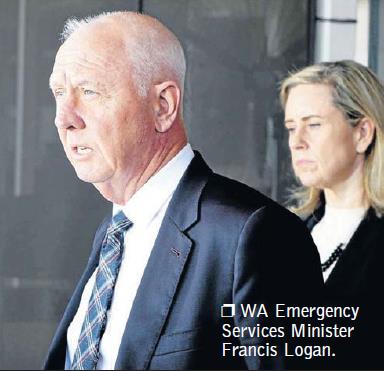 (There has) never been a higher level of transparency for how the Emergency Services Levy is raised, distributed and overseen than under the McGowan government.

Following calls for an advisory committee to be established to provide more oversight on how the ESL is being spent, Mr Logan confirmed the ESL Referral and Grants Advisory Committee had been formed and would perform its role during the next budgetary process.

“The BFB and SES capital grants committees, which include representatives from the various stakeholder associations, are responsible for the oversight of capital funding allocations to local governments for their bushfire brigades and SES units,” Mr Logan said.

With the past two State government budgets stating there would be an amalgamation of legislation covering the State’s emergency services, Mr Brown said the government hadn’t been “particularly consultative” with Bushfire Volunteers on the issue.

He said it was important for the government to maintain the local government bushfire service so that local communities could maintain “resilience and the opportunity to self-determine”.

“Although it’s messy and there’s more than 100 separate services, we think taking government decisions, management and control away would be a retrograde step,” Mr Brown said.

Pointing to the Ferguson Report into the deadly Waroona/Yarloop bushfires in January 2016 which highlighted some of the cultural problems within WA’s firefighting services, Mr Brown said one of the recommendations by Euan Ferguson to set up an independent Rural Fire Service had not been implemented.

“The State government didn’t deliver a Rural Fire Service – they delivered a department of DFES that doesn’t have an operational command and the consequence for that is we are now back to where we were before Yarloop, which was volunteers have to fit within a culture that doesn’t work for them and morale is falling as a result,” he said.

“That review recommended a Rural Fire Service because the review said you have this commanding [sic] control paramilitary culture and then you have the bushfire culture which just does not work.

“Under the proposal being floated, volunteers will have to surrender their culture which will be to the detriment
of local communities.

“The very reason bushfire brigades exist at a local level is because the State didn’t have the capacity to do it.”

However Mr Logan said there had and would continue to be extensive consultation with stakeholders regarding the State government’s commitment to consolidate the various legislation that covers emergency services.

“I am advised that the members of the State Bushfire Advisory Council and Bushfire Operations Committee, which includes stakeholder associations and volunteers, have been updated on the legislative process, which is in the very early stages,” Mr Logan said.

“As with any piece of legislation that goes through parliament, there will be a thorough and open consultation process with many opportunities for feedback and scrutiny.

“There will also be an exposure draft bill issued beforehand to again inform and invite feedback from the people of Western Australia about the new legislation.

“My hope is that the new legislation will alleviate inconsistencies across the legislation, better reflect modern emergency services operations and further strengthen our State’s abilities to prevent, prepare, respond and recover from natural hazards and emergency situations.

“The lengthy and thorough consultation on the new legislation has already begun and every step will be transparent just as it is with every piece of new legislation.

“It will then be examined in detail by two houses of parliament before it is passed, which will be some time away.”

With the Bushfires Act stating in the case of emergency an authorised person can take water involuntarily from any private landowner without any legal obligation to refill it, the Bushfire Volunteers also recently called for a change in legislation that guarantees the State government or ESL will compensate or pay for the landowner’s water to be replenished.

“It’s all been based on goodwill over the years and, typically, it’s never been a problem. but as more and more localities become water deficient we can see that water is going to become a much more expensive commodity and that’s going to create problems,” Mr Brown said.

“There’s a couple of practical issues like how do you know how much water was taken and vice versa, but there is technology available to manage that.

“I think it’s an oversight and it’s one of those legislative things that we’re calling to be fixed.”

Responding to Mr Brown, DFES deputy commissioner operations Craig Waters said DFES taking water from a variety of sources during emergency incidents, including those belonging to private landowners, was done to help save life, property and the environment during a bush fire.

“By accessing this vital water, firefighters are better placed to protect the community and reduce the likelihood of damage and devastation,” Mr Waters said.

While acknowledging that DFES is not legally obliged to cover the cost of water replenishment which results from firefighting activities, Mr Waters said water taken by the aerial firefighting fleet is recorded and if requested, local governments could replenish the water on behalf of DFES.

“Water taken by DFES firefighting appliances from dams during major incidents can also be replenished by the local government, with expenses recouped from DFES,” Mr Waters said.

“Each request is assessed on a case-by-case basis.

“Property owners who have insurance against fire damage can make a claim against that insurance for any loss or damage to property, including water taken for the purposes of firefighting.”