Albany Advertiser: WAFarmers and Bushfire Volunteers WA will host free forum in Albany to bring the region’s big issues to the forefront

Albany Advertiser: WAFarmers and Bushfire Volunteers WA will host free forum in Albany to bring the region’s big issues to the forefront

The WAFarmers Regional Roadshow visits Albany tomorrow and organisers want to hear about the region’s most pressing issues.

This year, WAFarmers has partnered with Bushfire Volunteers WA for the free forums.

“Two big issues that I expect to come up is the state of Albany Highway and the lack of mobile coverage along the entire route,” he said.

“Another is the lack of specialists doctors flying down to practise locally.

“Also health and how the regions are coping with COVID-19, industrial manslaughter and the impact of these new laws on farm businesses, and bushfire volunteers and if they are getting a fair split of the $400 million from the emergency services levy.” 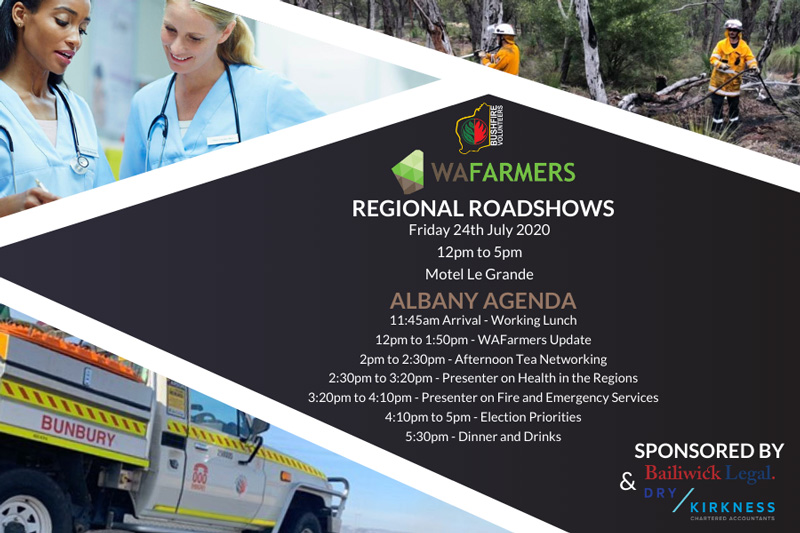 Mr Whittington said with the State election coming up early next year, WA Farmers were focused on getting a “clear set of politics” to take into the campaign.

“The more people we engage with across the regions the stronger our case will be,” he said.

“So this is a great opportunity for anyone in the region to join us and listen to what the parties have to say about key issues impacting Albany and surrounding districts.”

Now, it had the means to make that happen.

The roadshow starts at 11.45am at Motel Le Grance and is open to WAFarmers members and non-members.