Two wonderful messages in this great article by the Manjimup-Bridgetown Times/South Western Times:

Well done to all involved and thank you South Western Times for publishing such a positive article that speaks volumes about our incredible women and men of the various services (especially the Bush Fire volunteers!). 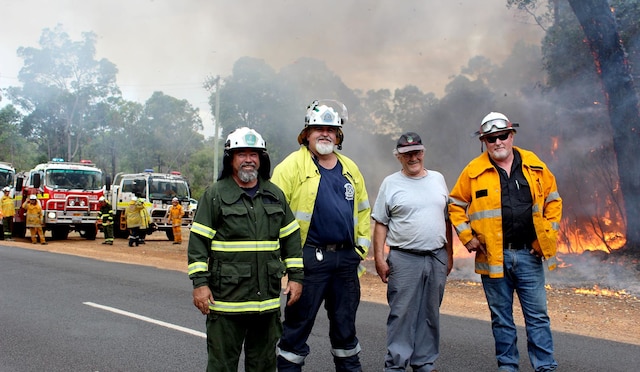 Northcliffe deserves an A+ for its volunteer-driven fire prevention measures, according to Government authorities and volunteer service representatives.

Representatives from the Department of Fire and Emergency Services, Department of Parks and Wildlife, Manjimup and Northcliffe volunteer bushfire brigades and Volunteer Fire and Emergency Service were unanimous in their conclusion that the Northcliffe Volunteer Bushfire Brigade’s community efforts to push fire mitigation had played a big role in reaching its high standard of fire preparedness.

DFES Lower South West bushfire risk management officer Joy Hamlyn said the Government departments and volunteers started working together more collaboratively after 2011 and while improvement had been seen across all town areas the dedication of the Northcliffe volunteers had been outstanding.

The departments now work together more effectively than ever to apply mitigation strategies including prescribed burning, which reduced the intensity of bushfires by pre-burning wood and other fuel loads in the bush.

“Collaboration of the agencies wasn’t there in the past, a lot of the fuels here were 30 years plus which is very, very dangerous,” Ms Hamlyn.

“Now, about 90 per cent of the fuels that are crown managed are less than five years old,” she said.

Ms Hamlyn said the scale of operations across all three departments meant it was heavily reliant on volunteers.

“That’s why Northcliffe is the shining light, there’s not many people here but the volunteers that they do have are really dedicated,” she said.

“They’ve taken the onus on themselves to go ‘this is our town, we want to protect it so we are going to get the burns done.”

Volunteer Fire and Rescue Captain Glynne Jones said Northcliffe’s unique community mindedness and a sense of mateship meant volunteers worked across both the brigade and the VFRS.

“When I first started this is was bunches of farmers just getting together with a ute and a few drums of water,” Mr Parkes said.

“The only way that we can protect communities is working together and making sure that we can we can reduce the fuels to minimise the risk of bad bushfires,” Mr Bennett said.

“All of the three departments have made huge in roads into reducing the threat on the town sites,” Mr Ridley said.

“It’s just better communication from everyone, and the volunteers, we wouldn’t be able to do it without them.”