The Association of Volunteer Bush Fire Brigades has been one of many experienced and knowledgeable voices calling for reform of the current bush fire management structure. We have said that emergency services were being guided along the wrong path toward a centralised model that has been cultivated steadily by the central government agency for more than a decade.

This view, widely shared across the rural sector and the urban fringe that are most exposed to bush fire risk, was endorsed by the Ferguson Inquiry that outlined a reform agenda away from the centralist model.

The Association has been working closely with SESVA, ESVA, WAFarmers and the PGA to develop a common approach to the reform agenda set by the Ferguson Inquiry.

However, during this election campaign, the Liberal Party has made some clear policy statements that remove ambiguity from this critical point.

This was reinforced by the correspondence from Premier Barnett to the combined reform advocacy group, and in which he challenges the Labor Party to makes its position equally clear.

“I genuinely value and appreciate receiving your views regarding the structure of government institutions dealing with bush fire risk and response. In particular, I recognise the significance of your organisations reaching an agreement regarding the general structures of the government’s emergency agencies, and applaud you for coming to a common view.”

“… the Minister and I recently confirmed that the RFS would be independent of the Department of Fire and Emergency Services (DFES), and would have its own Chief Executive reporting directly to the Minister. We also announced that Collie was a preferred location for the Service.”

“While the Opposition (Labor Party) has been quick to be seen to endorse these announcements, it is important to note that its commitments varied from the Government’s in two highly significant respects: it omitted reference to a Rural Fire Service being independent and it did not specifically endorse the Service having its own chief executive reporting directly to the Minister. This leaves open the likely option should Labor win the forthcoming election that an RFS would simply be a division of DFES reporting through the Fire and Emergency Services Commissioner.” 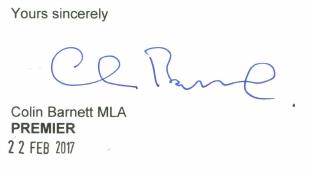