The Association of Volunteer Bush Fire Brigades (AVBFB) received the letter below dated 18 July 2018 today, signed on behalf of Emergency Services Minister Hon Fran Logan in response to correspondence we sent requesting consultation before any decisions were to be made regarding the “branding” of Western Australia’s proud volunteer bush fire service.

Our letter to the Minister was sent four days before the DFES Rural Fire Division was announced on 13 April and clearly demonstrates that at that time, the AVBFB was of the firm understanding that a full Rural Fire Service was imminent and there was a possibility of the RFS taking possession of Local Government-owned appliances and facilities – or at least changing the branding of Bush Fire Brigade equipment to unify it under the new service.

For those who can not read the full letter below, it begins with an apology for the delay in responding.

The letter then says:

“The creation of the Rural Fire Division (RFD) is a significant step forward for emergency services in Western Australia. It is the first step in working towards a more unified approach to bushfire prevention and management by facilitating greater collaboration between DFES, government agencies, associations and bushfire volunteers.”

It continues to acknowledge the pride that many volunteers have in the work they do for their particular service and explicitly assures us that:

“there is currently no plan to make any changes to the branding or identity of any of the volunteer brigades, groups or units.”

The letter concludes with the paragraph:

“I thank you for your offer of cooperation and I encourage you to continue to work with the Executive Director of the RFD as we work towards making Western Australia a safer and more resilient state.”

Obviously most of this is now redundant, but we thought it was important to share in terms of our understanding of the situation just prior to the government announcement, advocacy for consultation, the Minister’s assertion that there are more steps to be taken in creating a “more unified approach to bushfire prevention and management” and his reassurance that there is no plan to change the identity or branding of any volunteer emergency service. 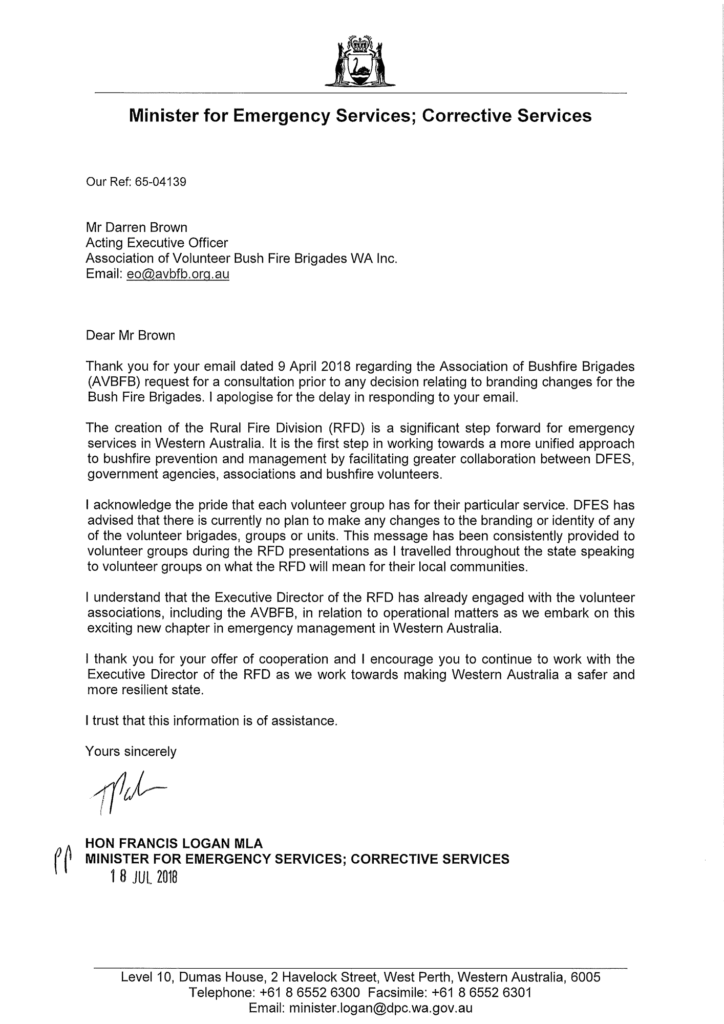