Letter to the Editor: Native orchids under burn threat

Letter to the Editor: Native orchids under burn threat

The Association of Volunteer Bush Fire Brigades (AVBFB) considers it unfortunate that the unknown author of the Letter to the Editor published in today’s West Australian newspaper below appears to have had dual purposes in writing to the newspaper.

On face value, the correspondent seems to be arguing against a planned fuel reduction burn at the Linville Reserve forecasting that “several species of orchid and other native plants will probably become extinct” as a result.

While it is universally agreed that care must be taken in regard to the management and protection of our natural environment, making such extreme and emotive claims significantly damages the credibility of that message.

The fact is Australian native flora often depends on bushfire for regeneration and planned burns like these have been skillfully managed by Aboriginal people for thousands of years. Indeed, a document produced by the former Department of Conservation says of the Diuris purdiei (Purdie’s Donkey Orchid):

“Plants in unburnt habitat will not flower and consist of one or two narrow and very inconspicuous leaves. The plant dies back to cylindrical underground tubers over summer”

“Extensive clearing has reduced the habitat available to Purdie’s donkey orchid, which is now known only from widely scattered pockets of remnant vegetation. However, it may still exist in long unburnt areas, and further searches after summer fire may result in the discovery of new populations.“

Beside the author’s catastrophization of the likely outcomes and total dismissal of advice from the Environmental Protection Authority, the credibility of the letter is compromised by the venomous tone it uses when detailing the activities of Local Government staff and volunteers.

Perhaps the most disappointing aspect of the letter is that allegations were levelled at the “Mandurah Fire Brigade” and others with no evidence other than one person’s account. The AVBFB is not questioning that the author believes what was published, but it is always disappointing when seemingly personal gripes emerge and derail an otherwise legitimate debate.

Not only is it problematic that those slurred by the letter were not afforded the chance to refute the claims before they were published, the potentially damaging allegations were made anonymously.

For the record, the AVBFB is a staunch supporter of planned burning and other bushfire mitigation work. A huge volume of research demonstrates that not only does much of Australia’s native flora require periodic fire to thrive, the risk of catastrophic damage to both the built and natural environments when (not if) fire starts is many times less where a planned burning regime exists.

Furthermore, the Google Earth image below amply illustrates the extreme risk to life that would be created by allowing a high fuel load to build up in Linville Reserve.

Finally, the tens of thousands of Western Australian women and men who donate their valuable time and professional skills to protect the lives and property of others deserve more respect than this.

A significant amount of the work they contribute to our community is directly in the protection of our natural environment. They sometimes have to make difficult decisions where human life will take primacy, but the portrayal of our invaluable firefighters as arrogant thugs recklessly trampling endangered flora is unproven, unwarranted and deeply offensive to those who give so much to protect what the author obviously holds so dear. 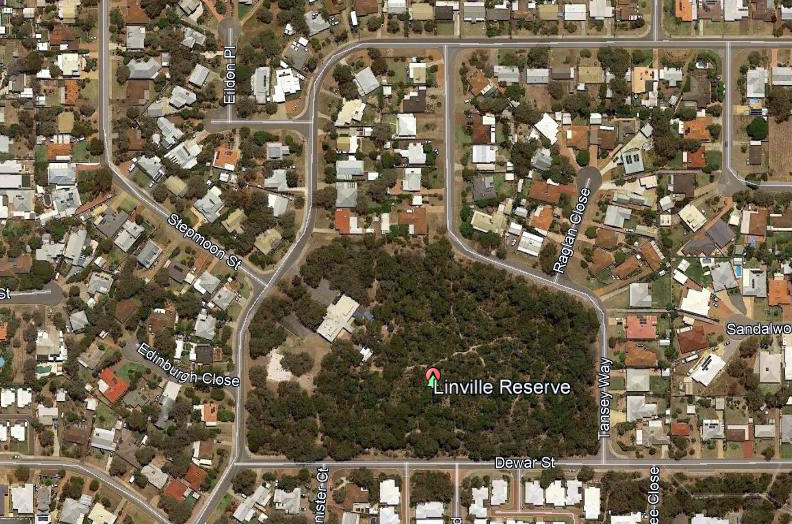 The Department of Conservation Fact Sheet referred to above: https://www.dpaw.wa.gov.au/images/documents/plants-animals/threatened-species/flora_posters/DiurisPurdiei2007556.pdf

Mandurah council and fire brigade are preparing to burn some bushland at Linville Reserve in Falcon.

The council has been informed there are native orchids on the reserve including some that are potentially endangered.

The council, fire brigade and the Environment Protection Authority claim there are no orchids on the reserve. But none of them has ever surveyed the area.

The council has been asked to postpone the burn until autumn so the orchids can flower, produce spores and then go dormant.

However, they won’t delay and are claiming they are burning the dead leaves on grass plants (Xanthorrhoea sp) in the reserve.

In April, council workers butchered the Xanthorrhoeas and cut off half of the green leaves on those plants. But they did not touch any of the dead leaves hanging on these plants.

Today, Mandurah fire brigade workers were at the reserve and they walked all over a bunch of Pterostylis and Diruis orchids, some of which were in flower.

I offered to point out the native orchids and was abruptly told there were no orchids on the reserve and that I didn’t know what I was talking about.

Mandurah council has also poisoned numerous native orchids in nearby areas, and thousands of endemic plants, as well as local trees, during their July spraying program.

However, they did not spray introduced weed species like African daisies.

Linville Reserve is one of the last areas left in Mandurah that has any native orchids.

If the council burns these plants now, there will be no orchids left in the area.

Further, several species of orchid and other native plants will probably become extinct.

Name and address not published