Learning from the experience of others

Learning from the experience of others

The Association of Volunteer Bush Fire Brigades (AVBFB) has, for a very long time, encouraged government to try to learn from the experience of others to reduce the time and money is takes to make things better for everyone.

For example, we know from many independent inquiries into the way things work (and sometimes don’t) in Western Australian Fire and Emergency Services, that there is a serious cultural divide between the highly regimented “command and control” structure of DFES and the way many bush fire volunteers are willing and able to work. The AVBFB spent years singing like a canary in a coal mine about the increasing impact top-down “doctrine” and lack of inclusion of volunteers was having and was chastised and lambasted for what turned out to be confirmed by both major political parties agreeing ti implement every recommendation of the Ferguson Inquiry, including the creation of a Rural Fire Service, funded interdependently of DFES.

We are now trying to help the government find a way to deliver its promise and are answering questions like “How would two independent fire services (metro and rural) work together?” – and one of the answers is that it works in almost every other State of Australia, surely we could get together and learn from their combined experience to get the best bits from all models.

Similarly, a key issue for many of our members has been the naive decision taken under the last government to maximise maintenance efficiency by reducing the number of vehicle types available. This has resulted in vehicles that are not fit for purpose and simply ineffective, or worse still, dangerous, in many environments and situations.

We are very happy to say that the relatively new Minister Fran Logan has reassured us that he understands the need for more flexibility in this area and promised to help bring back some common sense to the issue.

In the meantime, we thought we would publish this wonderful flow chart that appeared on page 9 of the current “Smoke Signals” magazine which is published by our friends at the Rural Fire Brigades Association of Queensland (RFBAQ). It is part of an article called “Fit for task – vehicle design” and is yet another great example of how we could all benefit by listening to and learning from the experiences of others. 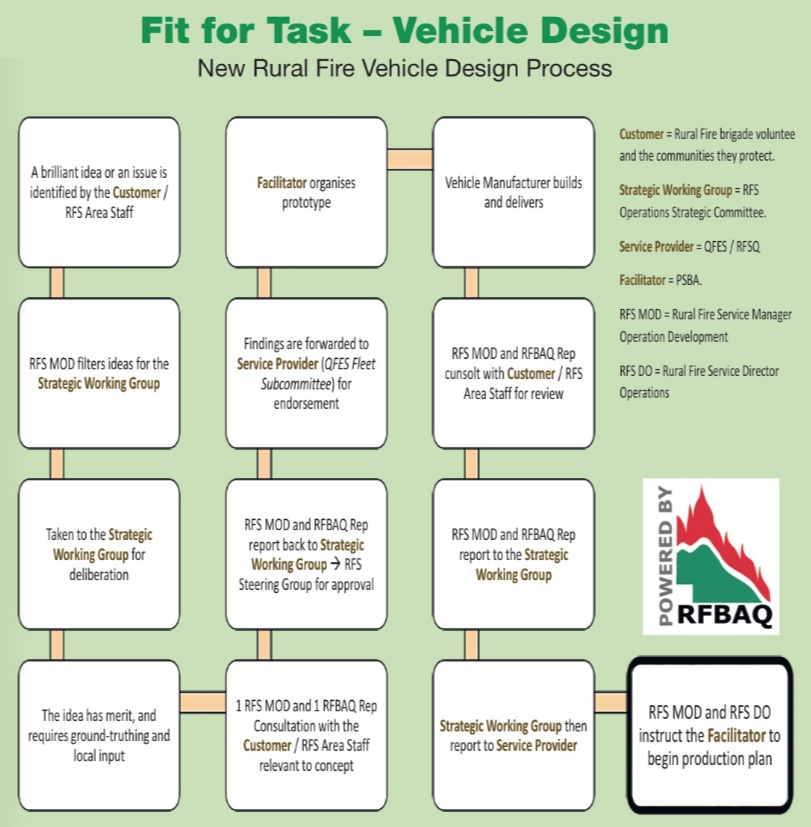 The flow chart showing the process of ensuring vehicles supplied to the Rural Fire Brigades in Queensland are fit for purpose. Published in the Summer edition of the RFBQA’s “Smoke Signals” magazine.