The Association of Volunteer Bush Fire Brigades has consistently promoted the need for vehicles to be built on a fit for purpose basis. We recognising that one size does not fit all in a state as vast and geographically diverse as our state.

Vehicles for bush fire fighting have to be capable of passing the most rigorous test in inhospitable terrain. Such vehicles cannot be essentially city vehicles with modifications for some gentle country 4-wheel driving.

Fit for purpose is the only standard that can be upheld as putting community safety first. Convenience, even modest cost advantages should not sway governments into buying fleets of vehicles that are broadly satisfactory yet fail the test in critical areas under varying circumstances.

We cannot afford to accept vehicles that restrict the capacity of fire fighters to get to fires and thus undermine community safety.

Such sentiment was echoed by the Esperance Bush Fire Brigade Chief Ashley Stewart following delivery of their new appliances, as reported in the article below from the Esperance Express.

While the fire appliances were intended to assist firefighters during emergency periods, volunteers in the region have expressed concern about the reliability and movability of the vehicles.

“The current models being rolled out are on-road vehicles with four-wheel drive capabilities. What we need is heavy-duty, off-road vehicles,” Mr Stewart said.

He said the new fleet weren’t reliable and said volunteer firefighters would have to modify the way they operate due to the equipment.

“We’re having to modify our attack on bushfires to cater for the trucks abilities,” Mr Stewart said.

The main concern Mr Stewart highlighted was the vehicle’s inability to adapt to soft terrain, such as the sand plains in the coastal heathland and the deeply ripped and moldboard plowed ground in the rural areas.

“We’ve got to be careful where we send the trucks to,” Mr Stewart said.

Mr Stewart said technology on fire fighting applications has continued to improve but said some updated features have raised alarm bells for him.

He said the emission reduction upgrades and the engineer management system could lead to the vehicle going into limp mode, which could potentially endanger volunteers lives in an emergency situation.

He said while some features including the main application on the back of the truck were satisfactory, the build of the truck itself was the issue.

“The trucks aren’t one hundred per cent fit for their purpose, they’re seventy five per cent fit,” Mr Stewart said.

In May Mr Stewart attended a session in Perth with fire chiefs from around Western Australia and the Department of Fire and Emergency Services (DFES) to discuss the equipment used in emergency situations.

He said grievances were raised during that session in more regions than just Esperance.

Mr Stewart said that he felt confident that DFES would continue to work to achieve better outcomes for local brigades.

The Shire of Esperance received four new appliances in the 2016 calendar year, these are all replacements for current equipment and include: A Light Tanker in Gibson, a 4.4 broad acre tanker in Mt Merivale, and a 3.4U broad acre tanker and a light tanker in Pink Lake.

Esperance Shire President Victoria Brown said the shire would continue to work with stakeholders to find an adequate solution.

“The Shire are requesting DFES representatives head to Esperance to discuss the concerns of the Pink Lake Bush Fire Brigade and provide an opportunity to exhibit the capabilities of both appliances,” Ms Brown said.

“The Shire would like to work together with DFES and the volunteers to find a satisfactory solution and make sure our brigades have equipment that can service the area in the event of a fire.” 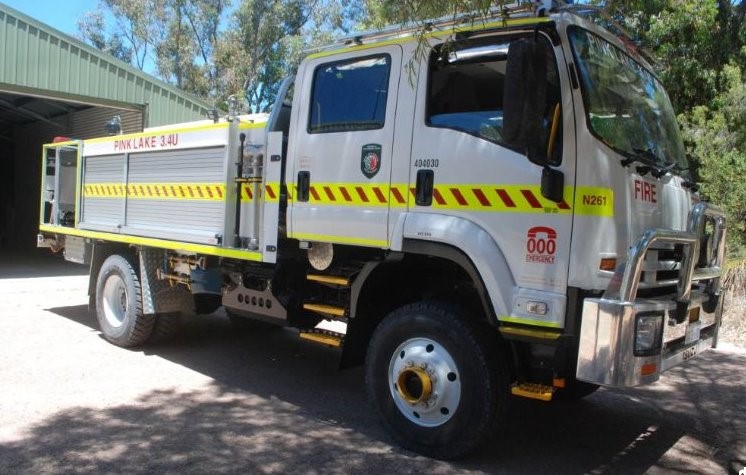