BOM: When bushfires make their own weather

BOM: When bushfires make their own weather

One of the things we know about the 26,000 incredible women and men of WA’s Volunteer Bush Fire Service is that many of them are thinkers and always keen to learn. The AVBFB is therefore happy to be able to bring interesting research like that from the Bureau of Meteorology (BOM) below to our members – after all, it is the combined wealth of local knowledge and wisdom that makes WA’s biggest emergency service something very special and deeply needed.

Let us know what you think!

When bushfires make their own weather

It’s well known that weather conditions can increase the risk of bushfires and make them harder to fight. But the relationship between fire and weather goes further—bushfires can create their own weather, generating ‘pyrocumulonimbus’ clouds and storms. So how do these form, why are they so dangerous and how are our scientists working to be able to predict them?

What are pyrocumulonimbus clouds?

They’re a thunderstorm that forms in the smoke plume of a fire (or nuclear bomb blast, or volcanic ash cloud). In Australia they most commonly form in large and intense bushfire smoke plumes. (The official name for clouds that form this way is ‘flammagenitus’, but they’re commonly known as pyrocumulonimbus.) 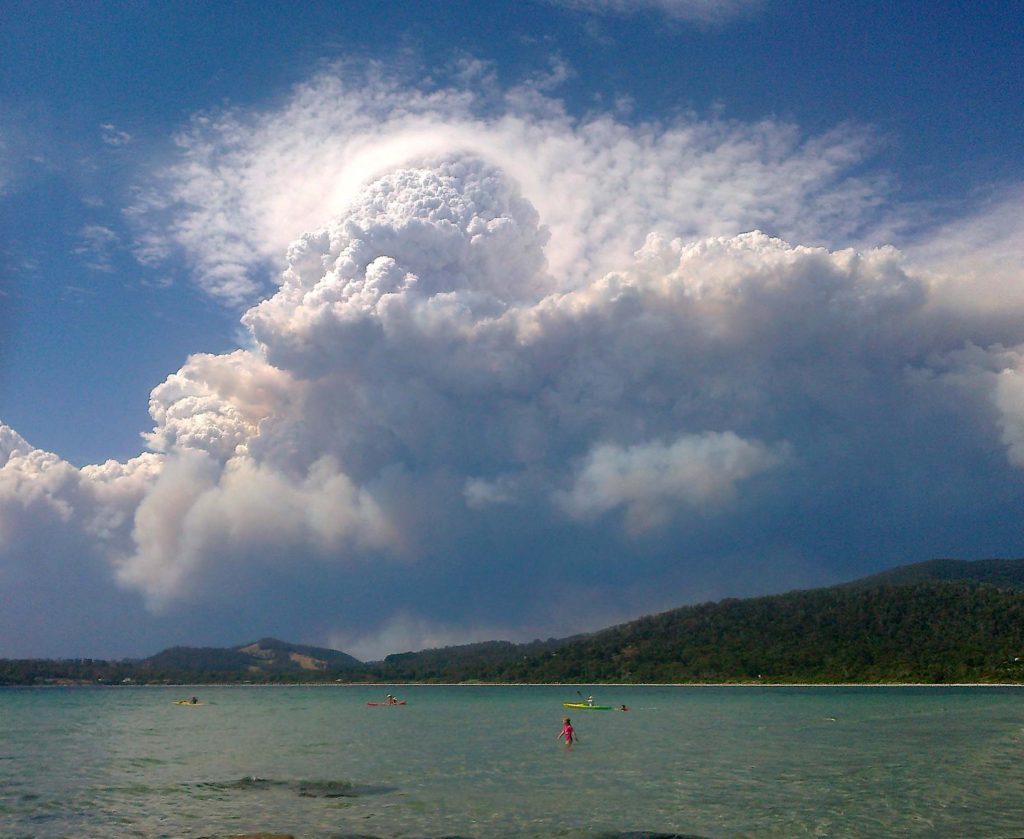 How do they form?

The intense heat from the fire causes air to rise rapidly in the smoke plume. The rising hot air is turbulent and draws in cooler air from outside the plume, which helps cool the plume as it rises. As the plume rises to higher and higher elevations the atmospheric pressure reduces, causing the plume air to expand and cool even further. If it cools enough, the moisture in the plume air will condense and forms cumulus cloud, which, because it comes from the fire plume, we call ‘pyrocumulus’. The condensation process causes latent heat to be released, which makes the cloud warmer and more buoyant and causes the cloud air to accelerate upwards. Further expansion and cooling causes more moisture to condense and the cloud air to accelerate upwards even more. In the right conditions the cloud can accelerate into the lower stratosphere before losing buoyancy. Collisions of ice particles in the very cold upper parts of these clouds cause a build-up of electrical charge, which is released by giant sparks—lightning. Having produced a thunderstorm, the cloud is now known as ‘pyrocumulonimbus’.

Why are they so dangerous?

Pyrocumulonimbus clouds can cause dangerous and unpredictable changes in fire behaviour, making the fire more difficult and hazardous to fight.

Change in fire direction and intensity

These clouds can produce intense updrafts that suck in so much air that strong winds develop, drawn in from all directions towards the plume. These can cause the fire to burn hotter and spread faster. The inflowing winds can cause nearby fires (perhaps caused by spot fires or lightning strikes, see below) to change direction unexpectedly as they are drawn in to the parent fire

The updrafts become very tall and because they are so strong they can carry large burning embers and lift them to great heights before they’re carried far downwind, where they can ignite new fires (called spot fires). During Victoria’s Black Saturday bushfires in 2009, one spot fire was recorded more than 30 km from the ‘parent’ fire.

Lightning can form in these storms, which can cause new fires. Again in Victoria’s Black Saturday fires, lightning from pyrocumulonimbus clouds started a new fire 100 km from the fire front.

Rain can also form in pyrocumulonimbus clouds, producing intense downbursts (caused by cooling from evaporation of the rain) that hit the ground and ‘burst’ outwards, producing very strong and gusty winds that can last 20 minutes or more. These winds can be strong enough to blow the fire in any direction, and have been responsible for deaths of fire fighters on a number of occasions.

How can research help us predict them?

Being able to predict these dangerous clouds will greatly help in fire-fighting and emergency management—so our researchers, in partnership with the Bushfire and Natural Hazards CRC, are working to make this possible. But the task is not simple. The formation and behaviour of pyrocumulonimbus clouds is complex and we are just beginning to understand it. To add to the complexity, predicting them will require new understanding of not just weather but also fire conditions and behaviour—two separate sets of variables.

Predicting the weather component will eventually be possible days in advance, but predicting fire conditions will remain a significant challenge for some time. This is because there is very large variability in fuels (and their moisture content), and the landscape, both of which have an enormous impact on how hot a fire burns and how fast it travels—and of course it’s extremely difficult to predict exactly where and when a fire will ignite. The weather, on the other hand, tends to be much more uniform across the landscape. Additionally, the fire’s response to the fuels and terrain is extremely complex—made more so by the weather’s effect on the fire and the fire’s effect on the weather.

Our researchers are studying pyrocumulonimbus cloud development, working towards a tool to help predict their formation, intensity and overall danger.

The team uses very high resolution computer models to produce virtual smoke plumes, so they can study how the plumes behave in different wind environments, how far they can transport embers and when they produce downbursts. For example, plumes tend to become taller in lighter background winds than they do in stronger winds. In stronger winds the plumes tend to be more bent over and have little turrets of smoke growing off the top. Sometimes pyrocumulus clouds form on top of these turrets.

The team also uses thermodynamic equations to understand how the influx of environmental air into the plume affects the height at which cloud can form. Using atmospheric temperature and moisture information from a radiosonde (weather balloon), the equations determine how high a smoke plume must ascend before cloud will form, and how buoyant the plume needs to be for deep cloud (which may become pyrocumulonimbus) to develop.

This is a relatively new area of science, and there is much work to be done before accurate prediction is possible. At the moment the team is using information from the virtual fire plume computer models and thermodynamic equations to develop tools to help with prediction. They are also developing a fire–atmosphere computer model. At present these models can help us learn more about bushfires. In the future, when computers become more powerful (necessary to run the complex model equations quickly and over larger areas) they will be used to forecast fire spread.

Will climate change affect pyrocumulonimbus events in the future?

The influence of climate change on conditions that cause these clouds is also an active area of research. Our researchers, in partnership with the National Environmental Science Programme have examined over 30 years of data for conditions associated with pyrocumulonimbus events (including the Canberra bushfires in 2003 and the Black Saturday bushfires). They found that an increased risk of pyrocumulonimbus has occurred over recent decades in some areas (especially the southeast in spring and summer), based on when conditions were favourable for both very dangerous fires and thunderstorms. Looking at climate models, the results also suggest that conditions associated with pyrocumulonimbus cloud formation may continue to become more dangerous into the future in some regions, such as southeast Australia.