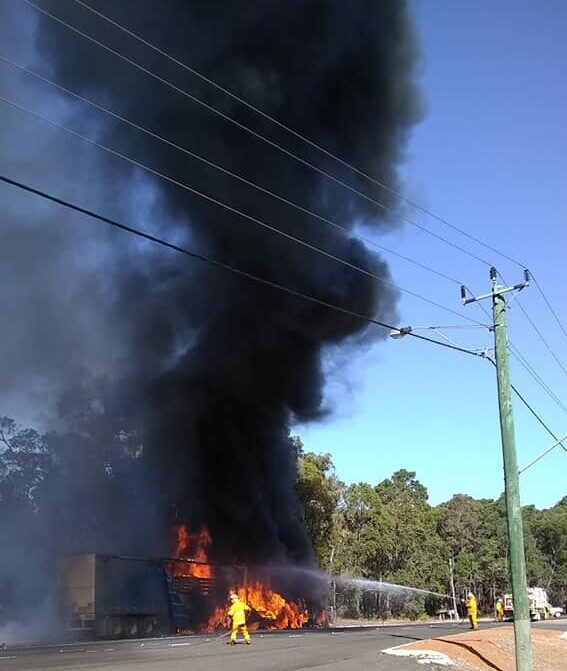 Firstly, congratulations to the incredible crews from the Kirup Brazier Volunteer Bush Fire Brigade and Donnybrook VFRS who attended and extinguished this fire that started on a truck and spread into the bush on South Western Highway in in Kirup Town yesterday – well done and thank you.

Photos from the incident not only show the skill and bravery of our incredible members, but also confirm a currently neglected failing of the Emergency Services Levy (ESL) funding system. Take a long hard look at the photo below: 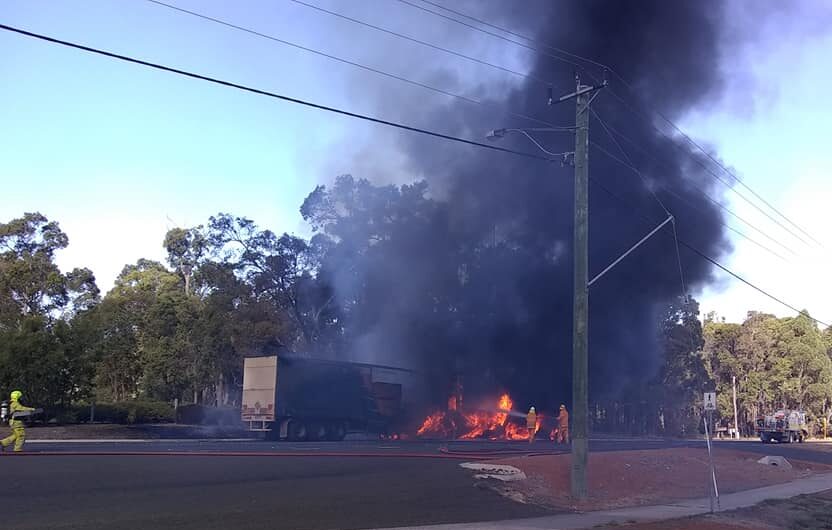 The photo above clearly shows two bushfire brigade volunteers (wearing gold) in the thick of the dark black smoke, bravely tackling the fire and the VFRS volunteer on the left running toward them to help.

Beside the colour of what they are wearing, can you spot the difference? BA – breathing apparatus.

The volunteer on the left has a face mask connected to the air tank on her/his back, unlike the bush fire volunteers who do not – and currently cannot – have access to what is sometimes necessary safety equipment.

While this will undoubtedly prompt some sitting in dark rooms to strap on their ninja turtle costumes and whack away at us for daring to raise the issue, the fact is the Association of Volunteer Bush Fire Brigades (AVBFB) has long advocated for these kinds of inequities to be corrected.

The very important context here is that Western Australia has a law that acknowledges the emissions from certain types of fires actually cause cancer. Indeed, the Workers’ Compensation and Injury Management Act 1981 calls the following types of fire Hazardous:

(b) a fire in a vehicle, whether designed to move under its own power or to be towed and whether or not still moveable; or

“the firefighting employment is, for the purposes of this Act, taken to have been a contributing factor and to have contributed to a significant degree to the specified disease, unless the employer proves the contrary.”

But despite the Association sometimes being accused of trying to cause division among the services, when we ask for equity in regard to the provision of personal safety equipment for all volunteers, the refusal is often more about protecting the “turf” of other services than protecting our amazing volunteers.

So we will continue to argue for volunteer bush fire brigades to be able to access ESL funding for any emergency services equipment, training and facilities the local government, brigade and members agree is required – not because they are volunteer bush fire brigade members but because just like the volunteers in other services, the health and safety of all the incredible women and men who have our backs should come well before ideological demarcation.

Once again, congratulations to both services (VBFS and VFRS) who worked together to managed this dangerous incident extremely well… and routinely do so at building fires, vehicle fires and non-organic rubbish fires even though one doesn’t have access to life saving personal protection equipment.