The Association of Volunteer Bush Fire Brigades (AVBFB) is pleased to see that the origin of Saturday’s dangerous bush fire in Bunbury has been identified and a person has been charged with causing it. The matter is now before the Courts, so we won’t comment on this specific incident, but generally speaking, it is a reminder that in most parts of our vast State at most times of the year, it only takes one careless spark or cigarette to start a fire that can quickly turn into a life-threatening emergency.

Thankfully the people of Bunbury are well supported with a number of highly professional and efficient volunteer and career firefighter, but even so, this fire damaged property and importantly, took many volunteers away from their families and put them in harm’s way – all to compensate for a single reckless or careless act.

So please, no matter where you are or what season it is, take extra special care of anything you do that could cause an ignition of any kind. 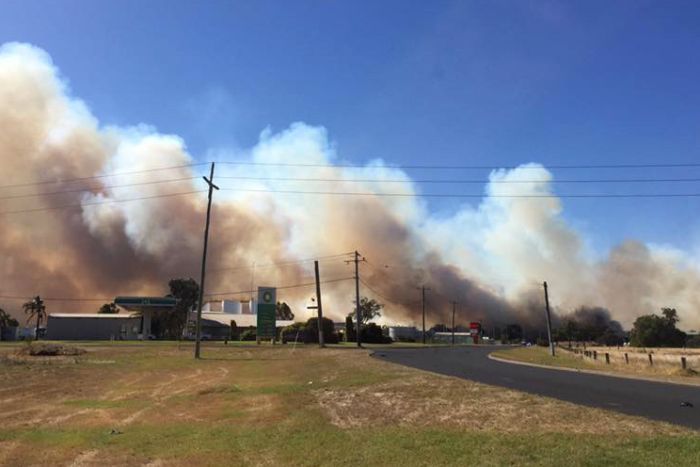 PHOTO: A fire near a service station at Bunbury has burnt through 162 hectares of bush. (ABC News)

A large bushfire which almost destroyed a house and burnt through 162 hectares of scrub was allegedly started by a lit cigarette flicked into the bush.

A 23-year-old man has been charged over a fire in Bunbury at the weekend, which cut power to homes and firefighters had to battle through the night to control.

WA Police say a man smoking in bushland across from Temple Road started a small fire when he dropped his cigarette butt into the scrub.

He tried to put it out, but it grew out of control.

The man then ran to a nearby service station and reported the fire to emergency services.

The fire ripped through bushland amid high winds on Saturday night and forced homes to be evacuated to the east of Bunbury.

It badly damaged a home on Bedwell Court in the Bunbury suburb of Glen Iris.

A man from the nearby suburb of Picton has been charged with breach of duty of care — duty to a person in control of ignition source of a fire.

He is due in court today.